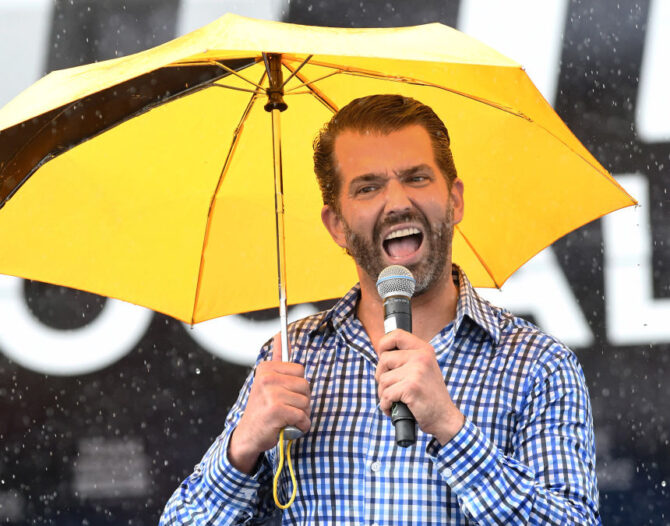 Donald Trump Jr. is freaking out on Twitter over baby formula.

He followed that up a short while later with a second tweet, writing: “You can’t find baby formula in the United States right now but Congress is voting today to send $40 billion to Ukraine. Let’s put America First for a change.”

You can’t find baby formula in the United States right now but Congress is voting today to send $40 billion to Ukraine. Let’s put America First for a change.

Baby formula has been in short supply across the country for a while now due to ongoing supply chain issues and labor shortages.

Per the New York Times:

The shortage became acute with a recall of a defective brand this year after at least four babies were hospitalized with bacterial infection and at least two babies died. But the recall has been exacerbated by relentless supply-chain woes and labor shortages. The Datasembly research found that the national out-of-stock rate for baby formula reached 43 percent for the week ending Sunday, up 10 percent from last month’s average.

Why Don Jr. is suddenly so concerned about this is anyone’s guess. He’s never been known for his care or interest in the wellbeing of children. In fact, his own ex-wife, Vanessa, accused him of being an absentee dad in 2018.

Also unclear is what the baby formula shortage has to do with the $40 billion Congress just approved in Ukraine aid or what sort of mental gymnastics Don Jr. had to do to make that connection.

Here’s how people are responding to his feigned outrage…

You may want to talk to the companies that recalled contaminated formula products.

44% of baby formula comes from China and a great deal from EU. Perhaps we( the United States of America) should start making our own necessities like idk baby food, pharmaceuticals,
Oil just saying.

Can you ask your father if there’s an alternative? He was spot on with his covid treatment suggestions.

“We aren’t exactly dealing with the brightest people” pic.twitter.com/yZZrWxO0tN

How is it President Biden’s fault that baby formula has been in short supply since 2020? 🤔

Right .. the brightest people worked in the previous administration…🍊🤡

He was responsible for the salmonella outbreak in the production facility?

Would you prefer people buy recalled baby formula? Or maybe we just shouldn’t regulate baby formula, so there would be no recalls

Let that sink in

So republicans want the babies but now they expect the government to feed them?

Subscribe to Queerty for a daily dose of #politics #babyformula #donjr. stories and more