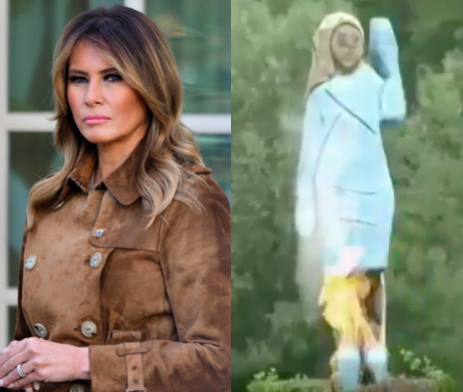 Hey, remember that wooden statue of Melania Trump that was erected in her hometown, the Slovenian town of Sevnica, last summer? Well, it’s gone now.

Last weekend, the statue was set ablaze by an unknown arsonist. One day later, the blackened remains were hauled away, and all that remains now is a charred stump where the figure once loomed.

The statue was originally created by an “amateur chainsaw sculptor” named Ales “Maxi” Zupevc, who was commissioned by American artist Brad Downey to create the piece honoring America’s First Lady.

The BBC described it as “a crude likeness to the US first lady” and locals in Sevnica branded it a “disgrace.” It showed Mrs. Trump in the blue coat she wore on her husband’s inauguration day with her hand in the air as though she were giving a Nazi salute.

Downey says he wants to find the person who burned the statue so he can learn what their motivations were, adding that he initially hoped it would open a dialogue about the fraught political situation in the U.S.

Naturally, Twitter has quite a bit to say about the torching.

A statue of Melania Trump, that previously stood near her hometown of Sevnica, Slovenia, was set on fire on July 4. The statue wasn’t destroyed, but was significantly charred before the artist took it down.

I DON’T REALLY CARE, DO U?pic.twitter.com/IDgndG7o31

Who set fire to the #MelaniaTrump statue? Probably Melania. pic.twitter.com/a9MfcnG2Mb

So wait… you’re telling me this is what the Melania Trump statue looked like BEFORE it was set on fire?… You sure? Really?#Slovenia pic.twitter.com/yYSzzSp938

This statue of Melania Trump outside her Slovenian hometown has been burned to the ground.

React how you will. pic.twitter.com/948OZN4oDK

Police say they have had launched an investigation into the arson attack. Meanwhile, the White House has not responded to any requests for comment.

Related: The internet has lots to say about this Melania sculpture erected in her hometown