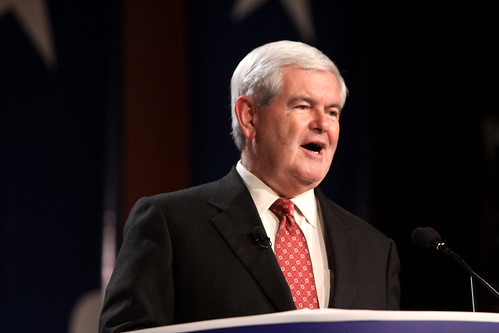 Republican voters in South Carolina just don’t like Mitt Romney. In a party where people who don’t fit the ideological mold are heretics, Romney’s constant policy reversals from left to right have made him anathema to a large segment of the voting population. His debating skills, on display twice this week, are lackluster at best. His Mormonism isn’t helping him any either. Exit polls from South Carolina show that one of the few groups Romney won were voters who said they were not born-again Christians. Since that’s a key part of the base, Mitt has a big problem on his hands.
His only advantage seems to be in the fundraising department, and even that is diminished by the new super PACS, one of which served up nearly five million dollars in advertising for the Newtster in South Carolina alone.

The unlikely recipient of the anyone-but-Romney tsunami was Newt Gingrich.

By any measure, Gingrich is one of the most flawed candidates ever. But to South Carolina voters, he’s the only true conservative they think can beat Obama. This despite—or possibly because of—the accusation just three days before the primary that Gingrich asked his second wife for an open marriage, so he could continue his six-year affair with his mistress (now wife No. 3).

Gingrich now emerges as the only credible (insert guffaw here) alternative to Romney. Goodbye, Rick Santorum. The vote comes at a time when Romney’s national numbers are collapsing and his inevitability train jumped the tracks. Just as interesting is that Republican voters have completely unmoored themselves from reality by concluding that Newt is also the stronger candidate in the general election. The general unease that the party faithful have always felt about Romney has turned into full-fledged disgust. Romney may be able to salvage the nomination yet, but to do so he’s going to have to pander long and hard to the evangelical base. And just one guess who is going to be on the receiving end of that rhetoric. In the meantime, we’re in for weeks of a campaign (next stop Florida) that will be simultaneously appalling and entertaining.