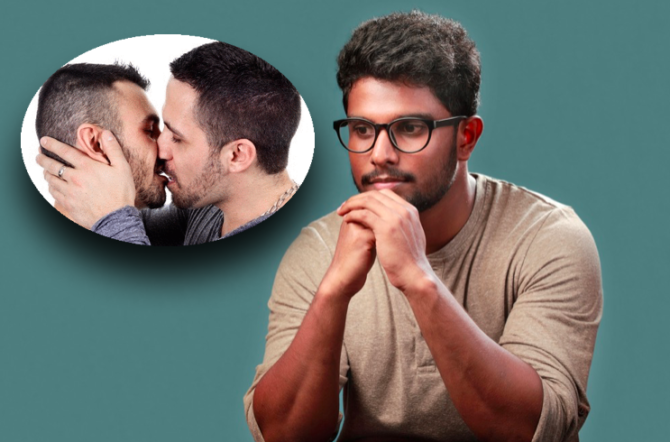 In a new Reddit thread, a straight-identifying man says he’s grappling with what he thinks may be homosexual tendencies, but he isn’t sure.

Basically, he likes cuddling, kissing, and getting naked with other dudes, but he doesn’t want to have sex with them. So is he gay or not? That’s the million dollar question.

OK, nothing wrong with that. After all, a lot of bros say they like cuddling with their bros. A 2014 study found that 93% or straight-identifying male athletes said they enjoyed spooning with bros on a regular basis.

The guy continues: “I don’t care if they’re naked, because it can be fun to touch. I like the intimacy of holding hands, long hugs, and kisses.”

Again, not as uncommon as some people might think. #BroJobs #DudeSex

“I think it’s absurd that two men are unnecessarily distanced by heteronormative/homophobic ideas,” the man writes. “Women may hold hands, hug, and kiss, and this does not define them as gay, but my peers think I am in denial.”

But he insists, “I do not have a sexual drive for men, but I am open to sexual acts if an intimate friend desires.”

All this has got him wondering: “Am I in denial?”

And now, the responses:

“I always thought of that as being homoromantic,” one person writes. “Also, there is a thing that’s called ‘skinship’ that’s essentially like this. I don’t think you’re in denial. You just know what you like.”

Skinship? We haven’t heard that one before, but we like it!

“I used to be just like you,” another person writes. “Literally everything you described fit me to a T. Then I just had sex with a guy. I loved it. So, instead of getting all confused about my sexuality and bent out of shape over it, I just accepted my self as an bisexual male.”

Someone else says, “Maybe you’re not gay, maybe you are. Only you can know for sure. But it’s clear you’re not entirely straight.”

To which another person replies, “Sexuality is very gray. But if you actively seek out and enjoy intimate situations with other men (especially the bit on kissing) I don’t really see how you could be straight.”

“There doesn’t have to be a label for every manifestation of sexuality,” someone adds. “We created labels to describe patterns of behavior, but it’s clear that they fall short in many cases (like this one). I know it sounds super hipster/edgy/whatever to be like, ‘I don’t like labels, maaaan’ but when it comes to sexuality I really don’t.”

Then there’s this gem of a response: “Nah….you ain’t in denial…you are in bed with a dude.”