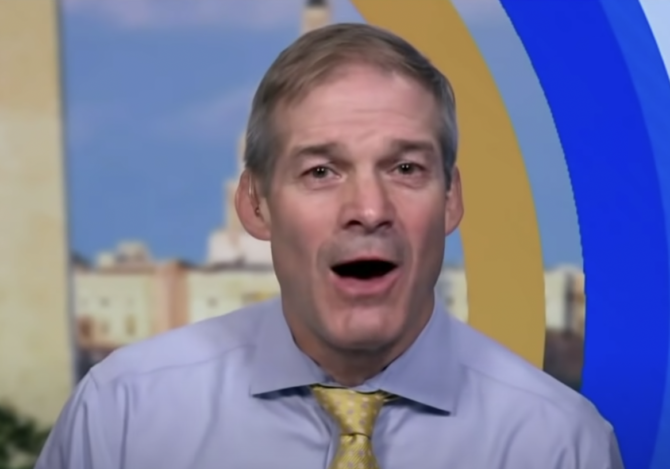 Jordan was previously asked to appear before the committee voluntarily, but he refused, claiming he had “no relevant information” that would help the investigation.

But committee members, who obtained text messages sent by Jordan to Mark Meadows in the days leading up to the deadly insurrection, felt otherwise.

“The Select Committee has learned that several of our colleagues have information relevant to our investigation into the attack on January 6th and the events leading up to it,” Rep. Bennie Thompson said in a statement on Thursday.

In addition to texting with Meadows, Jordan had at least one phone call with Donald Trump on January 6, and he was at White House days earlier participating in conversations with other lawmakers about how they might overturn the election results.

The committee hasn’t said how it plans to enforce Jordan’s subpoena, but his refusal to testify could result in contempt referrals to the Justice Department.

So how’s he reacting to all this? In typical Jim Jordan fashion, of course! By distracting and deflecting and doing everything he can not to talk about it.

Yesterday, Jordan went on Fox News to plug his new book. When Maria Bartiromo asked about his subpoena, he went on a nervous tangent about how the country is seeing “record crime, record inflation, moms that can’t get baby formula, blah, blah, blah” before calling the January 6 panel “ridiculous” and saying “seven out of 10 citizens think the country is on the wrong track.”

Unfortunately for Jordan, his tactics don’t appear to be working.

Here’s how people are responding to his tweets…

THINK OF NOTHING BUT THE LAPTOP!!

THERE IS NOTHING ELSE TO THINK ABOUT EXCEPT THE LAPTOP!!!

Why won’t @Jim_Jordan honor a subpoena and testify? What did he do on January 6 that he can’t say out loud?

Congrats again on the subpoena, Gym! I bet all those wrestlers you turned a blind eye to will be tuning in!

Don’t forget the same people who let 45 off the hook for blackmailing another world leader into throwing the US election, decided to scale the wall and steal OUR vote.
Gym was on the phone coordinating it.
The fun starts JUNE 9 BE WATCHING

When you receive your subpoena, it is YOUR DUTY to comply.
Otherwise we live in country where law makers think they are above the law.

Don’t forget, the same people that told you an insurrection wasn’t one, also turned their head to other things. pic.twitter.com/DiUoEneTBJ

Let us have look at your laptop…

This doesn’t negate the fact that the Jan 6th committee has your phone records Gym. It’s going to be a long summer for you bro.

Don’t forget …Sussman is charged (trial just starting) with a single count of making a false statement to the FBI .

Imagine how many harmful false statements Gym Jordan has made. Why won’t the guy “who has nothing to hide” testify??

Next month, the January 6 panel will begin televising hearings during primetime hours. The committee hasn’t said who will be called the testified before the cameras, but it sure seems like Jordan will be among the witnesses. If he’s not sitting in a jail cell for contempt, that is.

The blockbuster TV hearings are scheduled to begin on June 9.