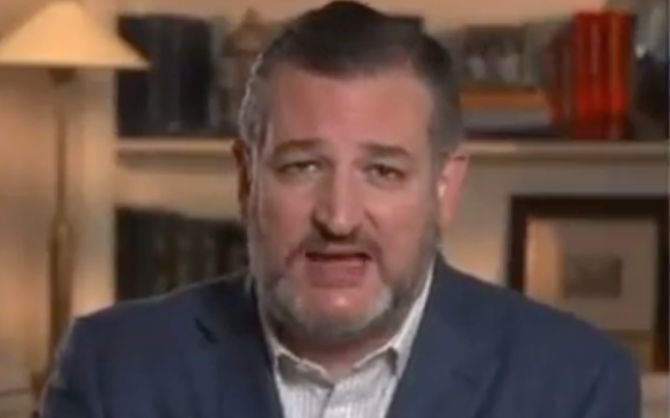 Ted Cruz appears to be very confused about the definition of violence.

On Sunday, the anti-LGBTQ senator appeared on Fox News and condemned the peaceful pro-choice protesters gathered outside the homes of Supreme Court justices for “embracing mob violence.”

The weekend protests came following the leak of a Supreme Court draft opinion written by Justice Samuel Alito that signal’s the Court’s intention to overturn Roe vs Wade. Pro-choice demonstrators gathered outside the homes of Justice Bret Kavanaugh and Chief Justice John Roberts to voice their opposition. There were no reports of violence.

Related: Ted Cruz says Mickey Mouse and Pluto are having tons of gay sex and we’re all a little dumber now

But as many a Twitter commenter has pointed out, when Senate Minority Leader Mitch McConnell referred to the Jan. 6 attack as a “violent insurrection,” Cruz said he strongly disagreed.

Cruz has demonstrated he’ll say just about anything if he thinks it’ll help him politically. He knows there was no “mob violence” on display at pro-choice protests, just like he at one point called Jan. 6 a “violent terrorist attack,” only to reverse course under party pressure.

Here’s how Cruz’s comments are playing out:

What’s that, @tedcruz about “mob violence” trying to get a “partisan outcome”? You’re a broken politician and so far up Trump’s ass you could tickle his swollen prostate. #PotKettle https://t.co/zSwYMAKRgo

Funny, I don’t see any body armor, or tasers, I don’t see any weapons or anyone attacking police or spraying them with bear spray…attempting to gain entrance to the home…Looks to me like “Legitimate political discourse, and peaceful protest”

Ummmmm, who wants to tell him? 🤔 pic.twitter.com/c05j5w5Uip

Of course, Ted Cruz was all in favor of the mob violence when the protestors were chanting outside the homes of election officials, school board members, and health care officials.

The irony is obvious, but also the blatant lie: there’s been no “mob violence.”

“They’re embracing mob violence to get their partisan outcome”: pic.twitter.com/HwktU1AjTk