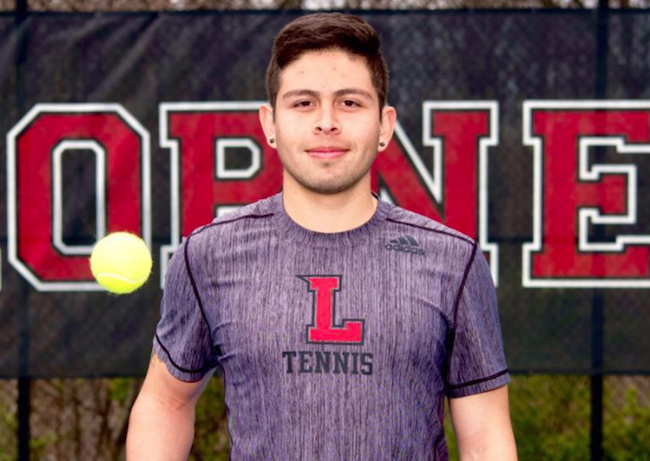 At the words, Dominick Gutierrez’s coach balked, agog, while many of his new teammates sniggered.

Fortunately, once the initial shock dissipated, it didn’t take long for the new coach to accept his student for exactly who he was.

In an essay for Outsports, Gutierrez chronicles the challenges coming out to a family that cherishes athletics and sports.

Related: Out high school wrestler learned how to turn homophobia into motivation, and it’s pretty awesome

Gutierrez, who plays tennis for Lynchburg College, writes: “Growing up, I was taught by people that you cannot be masculine, athletic, and gay at the same time.”

I remember locking myself in the restroom at the age of 14 and crying. Cutting myself was my only escape because I felt like I had a secret that I did not understand. I struggled with insecurities because being gay made me feel insecure. I kept memories in silence. This led to creating the worst scenarios in my head before coming out. I did not know who to talk to, so I kept my secret for as long as I could.

A post shared by Nat LeDonne Photography (@natledonnephotography) on May 5, 2017 at 6:34am PDT

His mother didn’t think he was serious when he finally worked up the courage to tell her.

“Are you sure?” she asked. “Because you don’t joke with that kind of stuff.”

Nevertheless, she told her son that “she loved me and she supported me.”

His brother was equally supportive, telling him “to never let anyone make me feel less for something I should be proud of.”

He attended Virginia’s Lynchburg College because the tennis couch at the time made him feel comfortable:

One of the things I needed from my team was trust. I wanted to be their support, and I wanted them to be part of mine.

But I knew that in order for them to trust me, I had to let them know who I really am.

When I came out to them I got very positive responses, and that was the moment when I realized that this team and the school were the right place for me.

This is my family away from home.

Although he gets the occasional comment (i.e., his peers can’t believe he’s gay because he doesn’t “act gay”), everyone’s been supportive overall — and some team players even want to approve guys before he starts dating them.

Related: Is this the most homoerotic wrestling video of all time?

“Sports saved my life,” he writes, “because when I feel like I have no one to talk to, I have this place where I can always rely on my teammates, who are my family.”

“I have learned that when my identity is questioned, all I need to do is to answer with PRIDE.”

You can read Gutierrez’s essay in its entirety at Outsports.