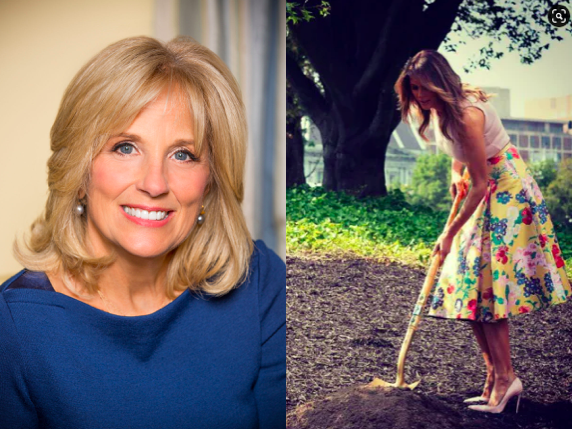 Dr. Jill Biden has spent her first 100 days as FLOTUS repairing the damage done to the Office of the First Lady by her predecessor, Melania Trump. But her work’s not finished yet.

A change.org petition urging Dr. Biden to fix the White House Rose Garden that Mrs. Trump killed has garnered over 43,000 signatures and counting.

Melania had the garden, which was originally planted by Jackie Kennedy in 1962, completely ripped out in 2019. She also had ten perfectly healthy crabapple trees removed for no reason.

It was one of the few things she actually did as First Lady.

In 2019, Melania Trump had the cherry trees, a gift from Japan, removed as well as the rest of the foliage and replaced with a boring tribute to herself. Jackie’s legacy was ripped away from Americans who remembered all that the Kennedy’s meant to us. We want Jill Biden and Doug Emhoff to take this on and restore the Rose Garden to Jackie’s original design.

Three weeks after Melania unveiled the new garden design, it had to undergo emergency repairs after experiencing “issues with water drainage” and “some minor complications with updated construction.”

Then the grass had to be completely redone after it was damaged beyond repair during the Republican National Convention, when hundreds of people trampled all over it.

The White House hasn’t yet responded to requests to have the garden restored.