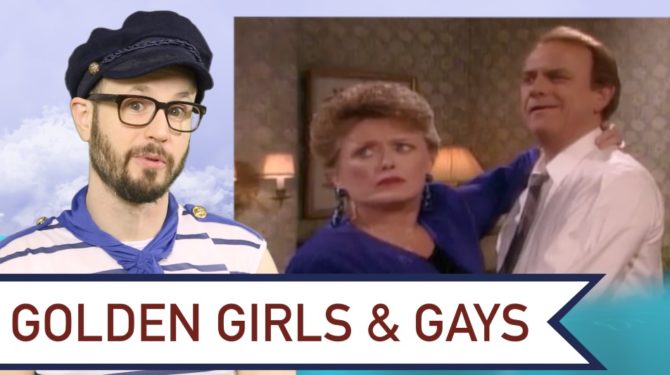 We all love The Golden Girls — and by all accounts, the show loved the gays right back.

For proof, look no further than the two episodes featuring Blanche’s gay brother, Clayton. Not only did the show introduce millions of Americans to topics like coming out and gay marriage, but it also managed to broadcast a message of queer empowerment from coast to coast.

In a brand new video series Culture Cruise, Queerty contributor Matt Baume takes a deep dive on Clayton’s appearances on the show. It starts with the episode Scared Straight, which aired in 1988, just a few weeks after the first National Coming Out Day. Clayton’s worried about coming out to Blanche, and initially tells everyone that he slept with Rose to quash rumors. But soon the truth comes out, and Blanche has to confront the feeling that she doesn’t know her little brother like she thought she did. Can she overcome her prejudice and embrace him? (Spoiler alert: yes, she can, and the episode will have you going “awwwwww” and getting all misty-eyed.)

Related: The Golden Girls, Their Timelessness And Their Very Gay Legacy

Clayton’s second episode is Sister of the Bride, and aired in 1991. That was just a few weeks after three couples in Hawaii began the process of suing for marriage equality. That one tackles queer love even more boldly: Clayton’s planning to get married, and Blanche is absolutely horrified. It’s clear that she wasn’t really as accepting of him as she initially let on. But then comes a famous scene where Sophia manages to explain gay marriage to Blanche (and to America) in less than 20 seconds.

What’s so remarkable about the episodes is that they feature a bunch of friendly little old ladies welcoming a gay man and his husband into their lives. They don’t just reflect American anxiety about queer people; they showed America how to get over that anxiety.

And if a southern dame can learn to love the queers, the show suggests, so can America.