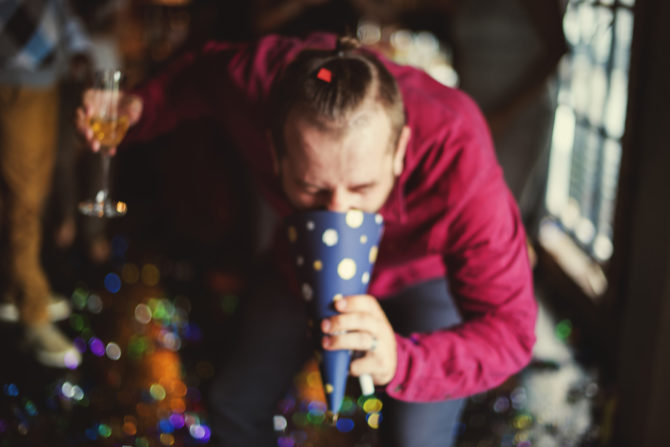 For years, Tyler Curry’s life was one big party. Drunken nights at gay bars. Champagne-fueled brunches. Shots! Shots! Shots! Until one day, when he was well into his 30s, he realized the party just wasn’t fun anymore.

“At the age of 33, I still found myself in the thick of the gay olympics of drinking and being ‘fabulous.'” Tyler writes in a new think piece. “Every weekend was filled with events that centered around alcohol, and every Monday came with bank statements of expensive ride-shares because I was too drunk to drive.”

Monday also came with feelings of embarrassment for how he behaved over the weekend, as well as feelings of inadequacy because “I couldn’t perform the way I wanted to at my job.”

“This fabulous life was taking a huge toll on my self-worth,” he says.

Related: You Look Hotter After One Drink, But Not After Two

But it wasn’t until “one particularly rowdy weekend with my gaggle of gays” that Tyler finally realized he might have a problem. He woke up one morning extremely hung over with only a hazy recollection of the night before. The rest of the evening was a complete black out, including the cab ride home.

Then he got to thinking about his dad.

My father died by the bottle after struggling and failing for decades to quit drinking. I always had him to compare myself to as proof that I did not have a drinking problem. He was scary when he drank and lost control of his whole life due to alcohol. I was just a more bubbly version of myself when I drank, I reasoned, and my entire environment mimicked my own behavior.

But, Tyler realized, that wasn’t exactly the case.

“I realized that my father was much like me when he was my age,” he says. “Alcoholism is a progressive disease, and my own was written all over the bathroom walls of the gay bars I frequented.”

According to the Pride Institute, an estimated 18 million Americans (roughly 15% of the population) suffer from alcohol addiction. The rate is even higher within the LGBTQ community. Numerous studies have found that as much as 45% of LGBTQs experience alcoholism.

“To the outside, I may not have personified what people think one might look like with a drinking problem,” Tyler says. “But I was the classic binge drinker, and my bottom was the realization that my actions were drastically different from those of the man who I wanted to be.”

Giving up the bottle wasn’t easy, Tyler says, but he’s happier now because he feels he’s become a better version of himself.

“If you have never thought you might have a problem with alcohol, none of this probably makes sense,” he says. “To the normal drinker, please enjoy one for me. But if you have ever questioned the hold that alcohol might have over your life, you owe it to yourself to choose you over the party.”

Related: “Lonely Homosexual Virgin” College Student Can Hardly Believe What Happened After He Gave Up Drinking