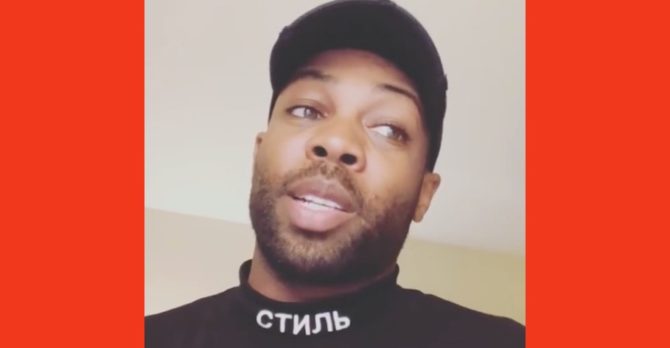 Days after sharing all the messy details of his relationship on Instagram, Todrick Hall has had a change of heart.

Last week, Hall went on an extended rant against his ex, whom he accused of lying, cheating, and deceiving.

Just when you thought Todrick had said it all… there was more, including sharing messages he’d received from other people online about his ex’s behavior.

In a new Instagram post, the 33-year-old musician and Drag Race judge apologized for how he handled the situation.

Hall has 1.2 million followers on Instagram, some percentage of whom are huge fans. And in any ‘huge fan contingency’, it’s safe to assume there will be some who are less-hinged than others.

Unfortunately, that meant abuse and death threats for Todrick’s ex. Not cool.

“I posted some things on my Insta story a couple days ago I should not have posted.

I was in a situation where someone I loved had betrayed me and lied to me. And while he was not my boyfriend, we were in a sort of relationship.

There were betrayals and lines that were crossed. I should have handled those situations behind the scenes. And instead, I took to Instagram which was a very immature Regina George-esque approach at life, and…I posted things online not realizing the impact that it would have.”

“I’m a  human being and I pride myself on being an idol to you guys and someone you can look up to as a role model, and this is not the way I would want my child to handle this situation…If I were my own parent I would say ‘You need to get online and you need to apologize in person and own up to what you did because that’s what a real man would do.’ The decisions I made earlier were not ‘real man decisions’, not ‘big boy decisions’, but this is what I think is the only thing I can do to fix it.”

So what’s the takeaway? Keep your personal drama off of social media as much as possible — learn it, live it, tell your friends.

I hate this thumbnail but I needed to say this. I have to lead by example, and this week I made poor choices. No one told me to do this, but I’m doing it because I feel like it’s the right thing to do. Please don’t attack Danny anymore, he is a good person, who just made a human mistake as we’ve both done in this situation. I’m sure he needs love in this moment too. You guys know my character and this is not what I’m about. I had a weak moment, but I will push through this chapter. I will continue to work on building a better me, but don’t ever lie to me, cuz I’m f**kin’ crazy. K bye ??