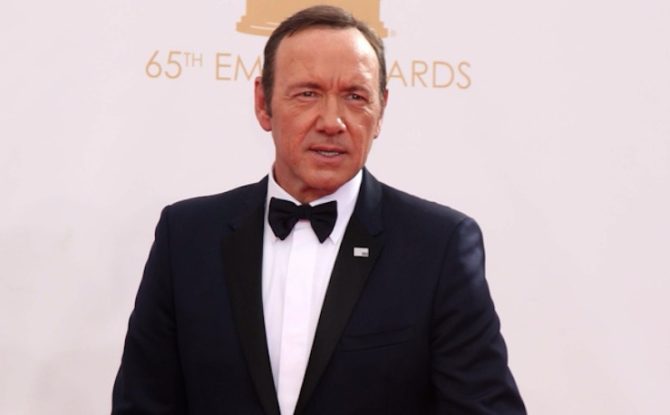 Yet another man has come forward with underage sexual assault accusations against Kevin Spacey, and the explicit details are truly unsettling.

In a chilling new interview with Vulture, the 48-year-old, whose name has not been released, claims he first met Spacey in 1981 when he was 12 years old after his parents enrolled him in an acting class. Spacey, then 22, was the teacher.

After the class ended they fell out of touch. Two years later, in 1983, he claims they met again by chance in line at Shakespeare in the Park. The man, who was 14 at the time, says Spacey, 24, was “in high seduction mode,” flirting, giving him his phone number, and inviting him over to his apartment.

“He said he’d always been really drawn to me at the acting classes, but had stayed away because I was 12,” the man recalls, adding that he was “very delighted with the attention” and “I felt like I’d won the lottery.”

I called him on the phone the next day, and he told me how he was in love with me and wanted to see me. I went and saw him at an apartment he was renting on the Upper West Side. He had a black Labrador named Snake. … We started a sexual relationship that first visit, which mostly involved me f*cking him. … We talked a little bit, but it was more like, “You know why you’re here, I know why we’re here.” I don’t remember a lot of conversation. I remember a lot of physical activity.

The alleged sexual relationship continued for a while. The man says Kevin made him feel “dizzy” with excitement.

My memory is that we met up three or four more times with, again, proclamations that we loved each other. Also, [he was telling me] that there were producers who were really interested in me as an actor and that he wanted to get me auditions. He talked about some play and how he wanted to get me an audition for it. He hadn’t seen me act since I was 12.

One afternoon when he was 15, he and Spacey arranged a meeting. What allegedly happened next is truly upsetting:

I guess he must have come up behind me and yanked down my baggy jeans, and he goes to f*ck me and I’m like, “No, I don’t want to.” And he pushes hard, and grabs me, and starts shoving up against my a**hole, and it hurts like a motherf*cker. I again tell him no, and he tries again. I am strong enough, thank God, both somewhere in my brain and in my body, to get him off of me. … I saved myself in many ways in that minute from the much deeper trauma that would’ve come from having been raped. Thankfully, some part of me was strong enough to be like, “F*ck no.” I’m so grateful to that little 14-year-old, that he didn’t say, I have to let him do this or he’ll stop loving me.

They did not see each other again for another year when the young man ran into Spacey at the 1984 Williamstown Theater Festival. Spacey suggested they get together after his show, but the young man declined the invitation.

“I turned it at the last minute and said, ‘I don’t want to see you’,” he recalls. “So that was that. And that has been the extent of my contact with him.”

When asked how he feels about Spacey today, the man replies:

I would call him a pedophile and a sexual predator. When I turned 25, I looked at every 14-year-old boy I could see, to try to understand what [Spacey] had seen [in me] … Up until then, I just thought about him as somebody who had really done me wrong and tried to rape me, but not as somebody who had functioned as a predator. And then, if you’re interested in sexual predation, you start to read about it, and you realize all these patterns and techniques, and it all kind of falls within a set of practices. … He is a pedophile. When you look at his statement, you realize also he’s profoundly narcissistic.

Related: Kevin Spacey’s brother: ‘Our father was a child molester and a Nazi’