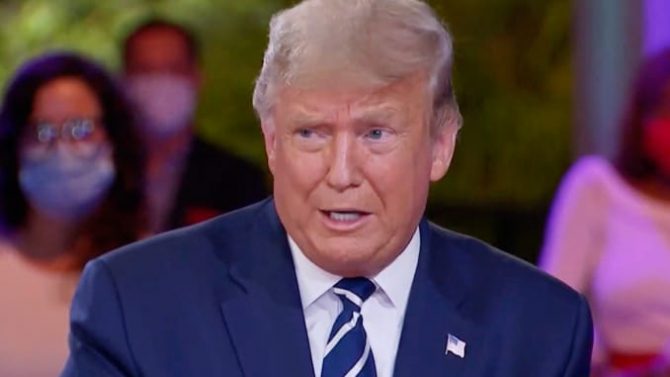 Well, the numbers are trickling in and it appears that Joe Biden may have won the ratings war against Donald Trump in last night’s dueling town halls.

Just for the record, TV ratings mean nothing and they certainly aren’t indicative of voting trends. But they matter a whole lot to Trump… which is why he is not gonna be pleased to learn that early numbers from Nielsen Media Research show Biden drawing a whopping 2 million (2 million!) more viewers than him.

The Democratic presidential nominee’s appearance on ABC drew 12.7 million viewers compared with the president’s 10.4 million. Final numbers will be available later Friday, which will include numbers from NBC simulcasts on CNBC, MSNBC and Telemundo.

Those numbers are even sadder for Trump when you consider his town hall event was simulcast across three different channels–NBC, MSNBC, and CNBC–while Biden only appeared on ABC. That means Trump had three times the opportunity to blow Biden outta the water and he still couldn’t manage to do it.

Even staffers at ABC is said to be caught off guard by the numbers, with many admitting privately that they were surprised when the preliminary ratings came in.

Now, like we said, ratings aren’t indicative of voting trends. Just because it looks like Biden beat Trump in regards to viewership doesn’t mean you’re off the hook when it comes to voting. You still gotta vote like your rights depend on it, because they do!

Related: The internet is stanning Savannah Guthrie for calling Trump a “crazy uncle” to his face