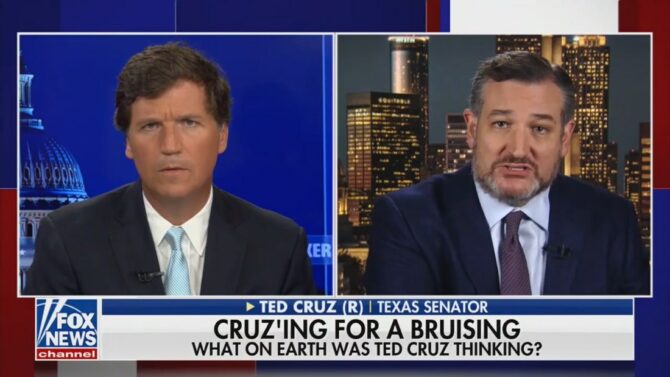 After calling the January 6 insurrection a “terrorist attack” earlier this week, Ted Cruz has given it some more thought, and he has decided that he no longer thinks it was a terrorist attack.

Quick backstory: Cruz royally pissed off Fox News propagandist Tucker Carlson and a whole bunch of other conservatives on Wednesday when he used the words “violent terrorist attack” while speaking at a Senate Rules Committee hearing about the security failures that made it possible for the MAGA militia to storm the U.S. Capitol last year.

Here's a video of Ted Cruz today referring to January 6th as a "violent terrorist attack on the Capitol".

After upsetting members of his own party by accurately describing them as terrorists, Cruz went on Carlson’s show last night to walk back the remarks and beg for forgiveness.

When Carlson asked him why he used the word “terrorist,” Cruz said his phrasing was “sloppy” and “frankly dumb.”

Carlson pushed back, and Cruz said, “What I was referring to are the limited number of people who engaged in violent attacks against police officers. I think you and I both agree that if you assault a police officer, you should go to jail.”

Then he clarified that he doesn’t think the peaceful protestors were terrorists, nor does he think the “millions of patriots across the country supporting Trump are terrorists.”

Carlson still wasn’t happen with the response. “What you just said doesn’t make sense,” he scolded, accusing Cruz of giving in to the Democrats’ narrative.

After some more heated back and forth, Cruz finally gave in and said, “I agree with you. It was a mistake to say that yesterday, and the reason is what you just said, which is we have now had a year of Democrats and the media twisting words and trying to say that all of us are terrorists. Trying to say you are a terrorist, I am a terrorist.”

Ted Cruz grovels apologetically to Tucker Carlson for his "sloppy" comments about January 6 being a "terrorist attack" pic.twitter.com/ZBPgLLBWIL

The whole thing was pathetic and a clear attempt by Cruz at salvaging whatever change he has at running for president in 2024. (SPOILER: He has no chance!) Last month, the Texas senator told The Truth Gazette that he’s considering another bid for the White House.

Ted Cruz’s groveling last night made it clear that Republicans will need to survive the Tucker Carlson primary.

Quick… somebody turn this into Tucker Carlson and Ted Cruz. pic.twitter.com/kUP5Atn81u

Pretty weird hearing Ted Cruz argue how the United States is becoming "emasculated" & how America needs manly men, then shortly after watching him suck Tucker Carlson's fish stick while he grovels at his feet begging for his love like a broken-hearted little girl.