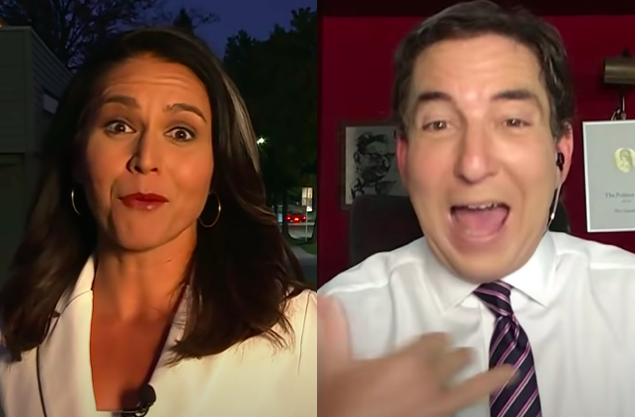 In case it wasn’t already painfully obvious, failed presidential candidate/ex-LGBTQ ally Tulsi Gabbard and once-respected gay journalist/defender of statutory rape Glenn Greenwald have officially gone over to the dark side.

The pair is teaming up with Rumble, the conservative alternative to YouTube, to create content that inspires debate.

Related: Tulsi Gabbard shows her “Aloha Spirit” by tweeting death wishes upon a man in the wee early hours

Rumble recently announced plans to spend hundreds of thousands of dollars on influencers who “challenge the status quo.” Gabbard and Greenwald have both signed their names in blood in exchange for some of that cash.

Gabbard announced this morning on Twitter that she will be launching a channel on the platform “soon” and that she’s super excited to be partnering with a company “where free speech is celebrated.”

I may disagree with what you say, but I and every service member is ready to sacrifice our life to protect your right to say it. Censorship of speech must end. I'll be launching my channel soon on https://t.co/gTfwLsFxuw where free speech is celebrated -> https://t.co/e2Ob2OimZa pic.twitter.com/L6jSQuOasK

As for Greenwald, he’s been trumpeting Rumble on Twitter for over a month, calling it a platform “devoted to resisting this liberal homogenization and authoritarian censorship.”

There are platforms that are now devoted to resisting this liberal homogenization and authoritarian censorship. Substack is one. Rumble is another. Parler was one but succeeded too much so Dems demanded Apple, Google & Amazon destroy it and they obeyed.https://t.co/qD9OdwlPbV

Rumble, which is partially funded by gay billionaire Peter Thiel, has become the go-to place for people who are banned from other platforms like YouTube and Twitter, usually for things like spreading misinformation, pushing conspiracy theories, or inciting insurrections.

Related: Glenn Greenwald is being dragged for suggesting Matt Gaetz has a right to commit statutory rape

In a press release, Rumble CEO Chris Pavlovski says, “Rumble is challenging this power structure, and the addition of these prominent creators further strengthens the cause of free thinking, open debate and discussion. Rumble will never censor civil discourse, opinion, or act like the arbiters of truth.”

Pavlovski’s statement, however, isn’t entirely true. Rumble does censor users. While they’re free to talk sh*t and spread misinformation about anyone and anything they want, the platform does not allow criticism of itself. The terms of service state that no commenter may disparage it in any of its own forums.