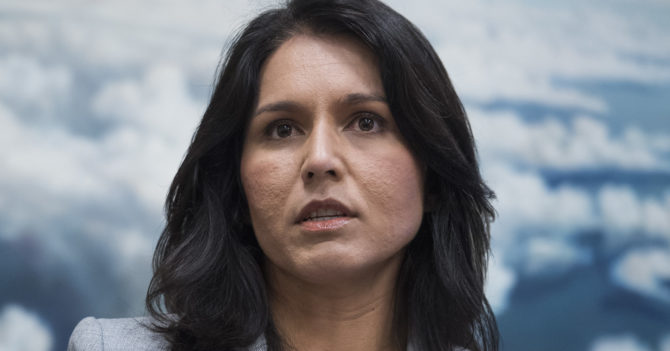 Under the new rules, passed by the House yesterday, gendered words like mother, father, brother, and sister will no longer be used to “honor all gender identities by changing pronouns and familial relationships in the House rules to be gender neutral.”

“It absolutely does the very opposite of that,” she said. “It’s the height of hypocrisy for people who claim to be the champions of rights for women to deny the very biological existence of women.”

That sounds like some J.K. Rowling bullsh*t right there.

The failed presidential candidate went on to argue that the new rule demonstrates just how out of touch lawmakers are with reality.

“Their first act as this new Congress could have been to make sure elderly Americans are able to get the COVID vaccine now alongside front-line health care workers,” she griped. “Instead of doing something that could actually help save people’s lives, they are choosing instead to say ‘You can’t say mother or father.'”

Gabbard went on to say that she believes there’s a “biological distinction” between men and women and that the new rule “defies basic common sense” and “basic established science.”