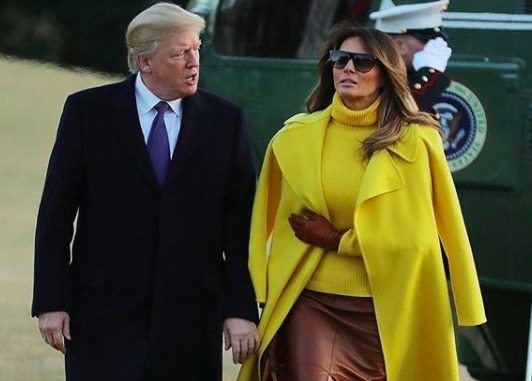 Another day, another video of totally awkward body language between Melania Trump and her husband.

Yesterday, the Trumps were seen walking across the White House lawn to a helicopter bound for Ohio.

Dressed in a banana yellow trench coat, Melania chose to wear the garment draped over her shoulders rather than putting her arms through the sleeves.

Things got even more awkward when the couple then bumped into each other, resulting in the stoic first lady stiffening up like a board as her husband maneuvered around her.

I always wondered why Melania wore her coat in such a stupid manner. I’ve never seen any woman consistently wear every coat like that. Now I know why! So Trump can’t ever grab her hand! Ha! Wearing a coat like that seems uncomfortable but look at the alternative. #coatskills

Related: Melania Trump tells sick children she wishes she could spend Christmas “on a deserted island”

just do it
26 comments