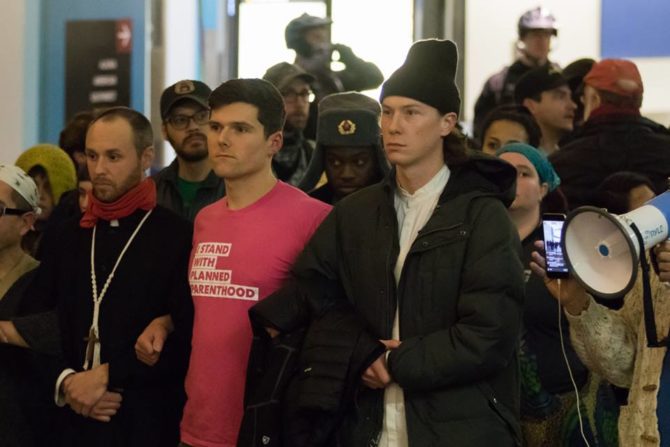 To some, he is known simply as “The Guy in Pink.” To others, such as The Conservative Post, he is a “liberal thug.” But to everyone else, he is Kent Thomas, a 26-year-old man from Tacoma, WA whose Muslim ban protest video went viral on social media.

The video, which depicts Thomas getting pepper sprayed, slammed to the ground, and ultimately arrested at Sea-Tac International Airport in Seattle, was featured on CNN and viewed nearly 5 million times (and counting) on Facebook alone. It is a number not even Thomas expected.

Related: Iranian man documents harrowing experience of trying to get back into the U.S. after Muslim ban

“[The response to the video] has been really overwhelming personally, but there has been such an outpouring of support, from lawyers offering their legal advice, to people all across the country randomly messaging me,” he tells Queerty in a phone interview.

While thankful for the outpour, Thomas hopes it goes beyond just him and his arrest.

“I really hope [the response] is not just focused on me, but that it is something that can be turned into actual action and care for refugees,” he says. “It is otherworldly to me that we’re actually going to shut our border to actual real, feeling humans that need safety and protection.”

Thomas was compelled to join the protest after seeing his pastor participating. At first, he thought it would be quick. “Walking in, I thought I would lurk, show my presence and maybe contribute by chanting,” he says.

Before long, he found himself pushed toward the front of the line, his pink “I STAND WITH PLANNED PARENTHOOD” shirt sticking out like a sore thumb in a sea of grey and black clothing.

Related: We should stand with Muslim refugees. We’ve been through this hell ourselves

Thomas says things got “really real” when the police started shoving. The more they shoved, however, the more “convicted” Thomas felt.

“I realized that there were actual detainees at [the airport] and it made me just think, if I were in that position, in some foreign country, I would sure as hell hope those citizens would mobilize to help me.”

Eventually, he was pepper sprayed, tackled by four police, and his hands zip-tied.

“There was so much adrenaline in that moment, I don’t remember feeling it at all,” he recalls. “I kind of went into this altered state of ‘What’s happening?’ and then all of the sudden, I was on the ground. It felt really vulnerable. I mean, these four very buff men [were tackling me], and it felt like I was nothing more than a towel or feather to them.”

Thomas’s husband, Mike, was watching the protests on Facebook Live when he heard Thomas getting arrested.

“I was shocked, but immediately grabbed my keys and started driving to the airport,” he says. “I didn’t know where to go, but I knew I needed to get close to him.”

The next day, Mike had the chance to watch the video firsthand on CNN.

“It was much more brutal than I expected,” Mike says. “It was really hard watching the person I love be treated that way. I keep seeing the video [on social media], and it hasn’t got much easier to watch.”

The police later released Thomas, once the pepper spray in his eyes subsided. “It turns out water makes it much worse,” he says, with a laugh. While some of the police were obviously aggressive and provoking, others demonstrated they “had actual feelings,” Thomas says. During the bus ride out of the airport, one officer told the group of protesters that they should be proud for standing up for their beliefs, Thomas says.

As for the protest itself, Thomas says it was an eye-opener. After all, it was his first non-LGBTQ-related protest, and there was a certain level of fear about how he–a white, privileged gay male–might be perceived.

“There was a fear that I could be perceived as, or actually be, a fraud… or that my presence might not actually be helping,” he says. “But then I remembered that, as a gay person, it means so much to me when I see straight people showing up [to support LGBTQ causes].”

Not to mention, the protest was a learning experience.

“It was humbling to realize that I have to grow in my awareness of issues,” Thomas explains. “Just because [an issue] doesn’t affect me directly, doesn’t mean it’s an ounce less important.”

And as for his favorite pink shirt? Thomas is not too worried.

“The shoulder is torn and it’s completely ruined,” he notes. “But it is a good souvenir for what happened. It’s worth it.”