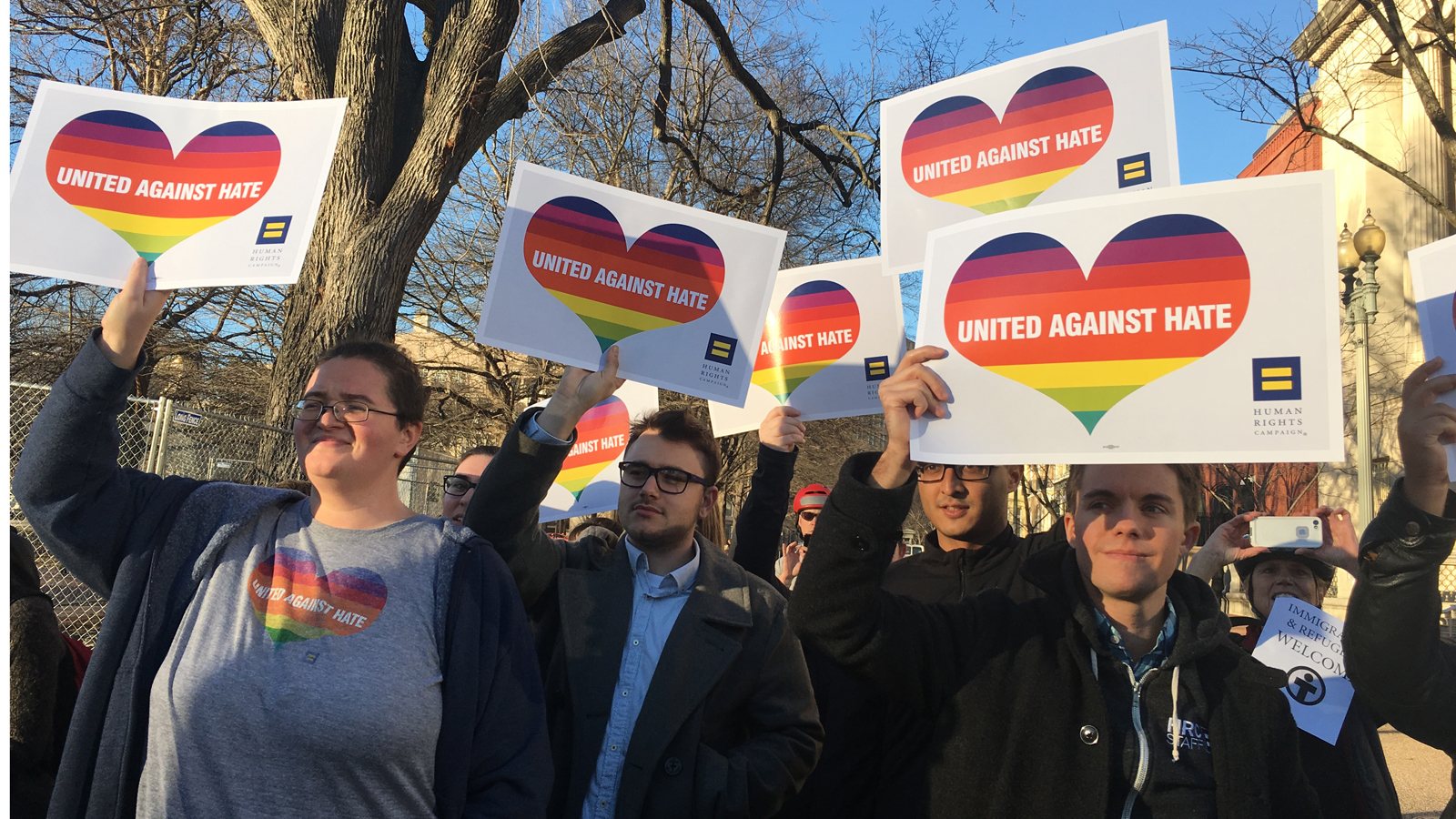 The reprehensible and probably illegal order by President Trump banning people from Muslim countries from coming to the U.S. is a reminder that Trump needs to be taken literally as well as seriously, no matter how much Peter Thiel argues to the contrary.  Candidate Trump promised to ban Muslim immigration and so he has.

The ostensible reason for the ban is to protect against terrorist attacks, an argument that makes no sense because it simply further inflames intergroup tensions, already running high. The real reason of course is simple prejudice. Breitbart head Steve Bannon was apparently the fine hand behind the order, and Bannon is all about keeping America a white, Christian nation. (And really Christian–the Trump administration’s statement commemorating Holocaust Remembrance Day intentionally did not even mention Jews.)

The right wing (led by Breitbart) will argue that we should be standing with Trump because of all the terrible things that happen to LGBTQ people in Muslim countries (at least ones that lack Trump golf courses). In fact, buried in the executive order is this devious, divisive line: “The United States should not admit those who engage in acts of bigotry or hatred…or those who would oppress Americans of any race, gender, or sexual orientation.”

But the people the U.S. is keeping out are victims too.

More to the point, the decision is based on fear of a group. And if anyone knows about that, we should.

In fact, we were targets of a previous travel ban, vicious in its own right and animated by the same kind of hatred. In 1987, Jesse Helms, probably the most homophobic Senator in U.S. history, introduced legislation that banned anyone with HIV from entering the country or seeking to move here without getting special permission. The Reagan administration was all too happy to add HIV to the list of reasons to block someone from entering the country long after it was proven without a doubt that HIV is not casually transmitted.

At the time of the ban, HIV was considered a disease of gay men. In essence, the U.S. was declaring that gay men were not welcome in the U.S. The ban remained in effect until 2010, when then-President Obama finally repealed it. The ban was the reason why international AIDS conferences could not be held in the U.S., since activists from other countries could not travel here to attend a meeting. It also separated families, couples, and deprived HIV-positive people the fundamental right to travel and associate openly.

Even when it comes to national security, prejudice can outweigh the national interest. In 2002, the military purged a number of translators for being gay, including six trained in Arabic. At the time, there was a critical shortage of personnel skilled in Arabic, but the government decided that homophobia counted more than the nation’s security needs.

Whatever the outcome of the current crisis, the fact that it happened at all is a blot on our history. What is frightening is that it may not be the only blot we can expect over the next four years. What is shameful is how few in Trump’s own party are willing to stand up to him, even though many Republican leaders like Paul Ryan had condemned the Muslim ban when Trump first floated it. Even Mike Pence said he opposed it.

Now of course, Trump is president, so most congressional Republicans are happy to fall in line to get their agenda passed. They’ll defer to the top dog, even it if means that they become his fire plug.