UPDATE: Musician claims he’s bicurious and that his gay bashing video was just a ‘joke’ 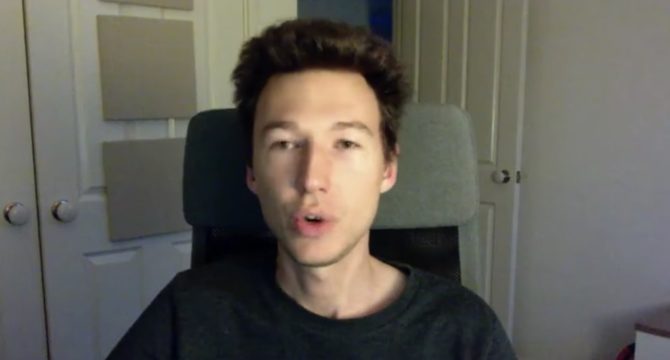 The video found its way onto Reddit, and now former fans (including us!) are wondering what on earth is going through someone’s head to be so seemingly proud of their weakness.

In the self-published clip titled “Why I called my channel Fagottron”, Bertke says:

“I’ve always had a very thorough dislike of homosexuals. I’ve never liked a grown man acting like a 12-year-old girl. I’ve always found that to be quite disgusting. And so I thought to myself, how best can I express to the world that gays are just an abomination?”

He adds: “I think nothing encapsulates the sissiness of a guy quite like the word ‘faggot’…I have a fairly robust resentment of the gay community. I don’t want to really get into this, but when there was the Orlando shooting and the guy was shouting ‘Allahu Akbar’ or something I was like (pumps fist). But yeah, I’ve got to be a bit careful with that because well, you know, I don’t like gays, but I don’t want to see people getting killed in nightclubs either. But still, I mean, it’s just fantastic.”

Pogo made a name for himself on YouTube remixing classic Disney movies into euphoric electronic soundscapes and has racked up over 110 million views on his channel.

Something tells us he’s about to plateau at around 110 million.

One commenter summed it up nicely: “In a few months TMZ will publish he was found kissing a guy.”

“This guy’s so deep in the closet he’s finding Christmas presents,” chimed another.

And whether his views are self-hatred or just hatred, one thing is certain:

“How to destroy your career in less than 3 minutes,” described one astute viewer.

UPDATE: Musician claims he’s bicurious and that his gay bashing video was just a ‘joke’