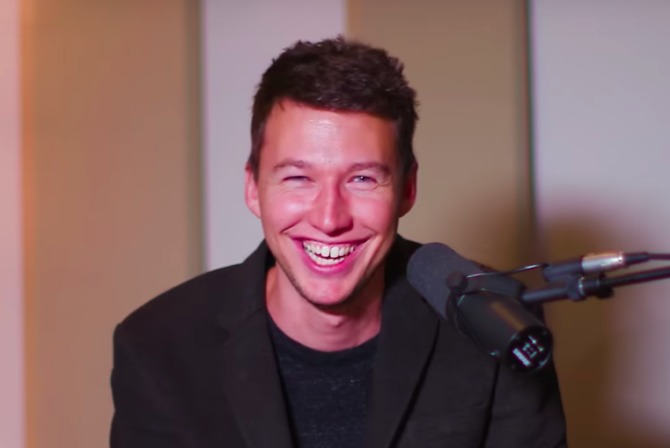 Electronic musician Nick Bertke, a.k.a. Pogo, whose video detailing why he hates gay people and cheered after the Pulse nightclub massacre went viral yesterday, is addressing the outrage he’s caused.

Just to recap: Bertke made a name for himself on YouTube remixing classic Disney movies into euphoric electronic soundscapes and has racked up over 110 million views on his channel.

In the shocking video released yesterday, the musician said:

I’ve always had a very thorough dislike of homosexuals. I’ve never liked a grown man acting like a 12-year-old girl. I’ve always found that to be quite disgusting. And so I thought to myself, how best can I express to the world that gays are just an abomination?

I think nothing encapsulates the sissiness of a guy quite like the word ‘f*ggot’…I have a fairly robust resentment of the gay community. I don’t want to really get into this, but when there was the Orlando shooting and the guy was shouting ‘Allahu Akbar’ or something I was like (pumps fist). But yeah, I’ve got to be a bit careful with that because well, you know, I don’t like gays, but I don’t want to see people getting killed in nightclubs either. But still, I mean, it’s just fantastic.

After uploading the video to his YouTube channel, it quickly went viral. Naturally, people were pretty upset about the whole thing. And an international backlash ensued.

Now, in a new video published today, the musician claims it was all one giant social experiment/joke and that he was “just being an a**hole.” Also, he says he’s bicurious, bipolar, and has Asperger’s, which sometimes affect his ability to make good decisions. Or something.

“The things I said in this video I think have deserved the reception that the video has had,” Bertke says in his latest video. “I love confusing people…Then I took it too far.”

He continues: “There is no pinch of salt big enough to be taken with what I have said. It’s all good and well for me to open a valve and to draw people out into the open–people I don’t like, you know, hypocrites et cetera–but I feel very strongly that it’s been very naive behavior on my part.”

Bertke goes on to say he made the video “for the sake of being edgy” and that it has “never been my intention to hurt people.”

“It’s a part of me that I think is slowly growing up,” the 29-year-old concludes. “If you have recognized the jokes you have my deepest appreciation.”

In text accompanying the video, Bertke offers a slightly differently excuse. Not only does he claim to be bicurious himself, but he says he suffers from Asperger’s and bipolar disorder, which affect his sense of humor and ability to empathize with others:

I don’t hate gays. I am in fact bicurious myself, and it has not been easy within the culture I have been raised. The 2016 video circulating was a satirical sh*tpost made in bad tastes and I never intended for it go public. I have Asperger’s and Bipolar disorder so my sense of humour and empathy for people is often very muddled. It’s a condition I’ve struggled with for many years as an artist who feels passionately about things and who faces the public eye every hour of my life. The internet has taken the video very far out of context and proportion, but I am very sorry to the people who I the video has hurt or confused.