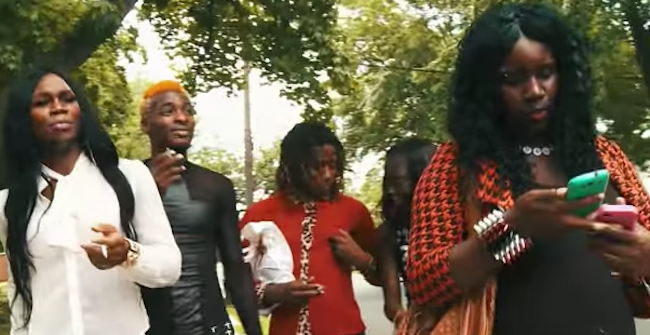 Louis CK is using his influence to help promote the 2016 documentary Check It, which delves deep into a street gang in Washington, D.C. whose members are predominantly black and LGBTQ.

Members of the gang use violence in order to defend themselves against hate crimes at the hands of potential gay bashers — while also working towards becoming fashion designers.

CK, who executive produced the film, says in Check It‘s trailer that “the film knocked me out.”

“It’s so good, and it’s about these kids that are protecting each other in a very dangerous world…. They’re funny and they’re interesting and their stories are very moving and engaging…. It’s a complex film. I still think about it all the time.”

Related: America’s Only All-Gay Gang Stands For Much More Than Crime

The film revolves a round Star, a transgender female who was often beat up in school. She eventually banded together with other bullied gay, lesbian, and trans youths to form “the Check It,” an all-gay street gang that reportedly has 200 members.

Members of the gang claim they’ve been shot, raped, and, in many cases, disowned from their families. Some dropped out of school to live on the street, stealing and selling their bodies to survive. In order to protect themselves, they brandish black knuckles, knives, and mace.

They claim they’ve beaten potential bashers, putting them in comas, stabbing them with ice picks, and forcing one assailant to drink bleach.

Some members work with The Jarmal Harris Project, a non-profit that shows young people how to design clothes and sell their work — although making the transition to a professional adult life isn’t so easy for members of the gang, who’ve grown accustomed to using violence to solve their problems.

Directed by Dana Flor and Toby Oppenheimer,  the film follows the gang from 2012 to 2014. The film itself originally premiered at the 2016 Tribeca Film Festival. The film is riveting, particularly when you consider that roughly 20% to 40% of homeless youth identify as LGBTQ.