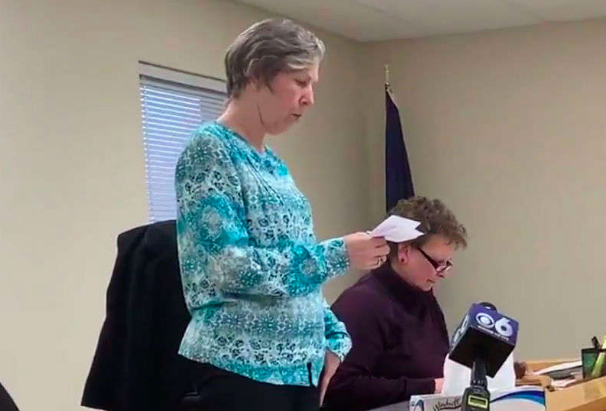 When Dylan Toften and Thomas Hurd went to get a marriage license at local town clerk’s office in Root, New York last summer, Sherrie Ericksen refused to give them one.

At the time, Ericksen lied and told the guys they needed to have an appointment. Also, same-sex marriage was against her deeply held religious beliefs and so she couldn’t bring herself to do her job.

After Eriksen turned the couple away, they took to social media to share their story, tagging New York Governor Andrew Cuomo, who responded: “Marriage equality is our law in NY. The denial of a license to a same-sex couple is an unconscionable act of discrimination.”

After the guys threatened the sue the town of Root for discrimination, they worked out a deal: The town would pay them $25,000 and they’d get a public apology from Eriksen.

Yesterday, standing before a roomful of people, including town leadership, community members, and local news cameras, and looking very nervous, Eriksen rattled off her apology.

“On 30 July of last year, there was an unfortunate incident involving Mr. Thomas Hurd and Mr. Dylan Toften, who came to my office seeking a marriage license,” she said, her voice shaking.

“I am sorry for any harm or inconvenience my actions caused the couple.”

Town of Root clerk apologizes tonight 8 months after denying a gay couple their marriage license. The town has also reached a cash settlement with the couple. Hear from them tonight only on @CBS6Albany #MarriageEquality #LoveIsLove pic.twitter.com/e39x399HRK