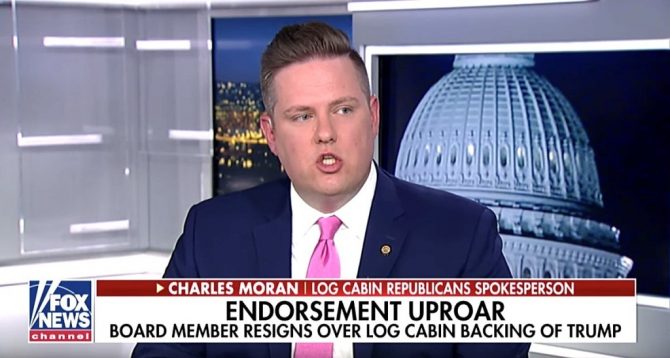 A spokesperson for the Log Cabin Republicans has defended the group’s endorsement of Donald Trump in the 2020 election as well as downplayed the resignation of longtime board member Jennifer Horn.

Charles Moran took to Fox News (where else?) to try to qualify the baffling endorsement. The Trump administration has attacked LGBTQ rights almost nonstop since taking office, prompting Jennifer Horn to resign from the all-gay Republican group in disgust after the announcement.

“We always try to follow the rule of trust but verify,” Moran also added. “And looking at President Trump’s appointments, appointing people in our organization, taking meetings with our organization, and just really advancing the big causes that are important to the LGBTQ community.”

Trump’s appointees to the judiciary and his cabinet are some of the most ardently anti-queer justices in history. Judges like Brett Kavanaugh and Matthew J. Kacsmaryk have both criticized protections of LGBTQ works, transgender rights and marriage equality. Kacsmaryk has even referred to queer people as suffering from a psychological disorder.

In addition to the resignation of Jennifer Horn, a number of prominent leaders of local chapters of the Log Cabin Republicans have also resigned over the endorsement of Trump.