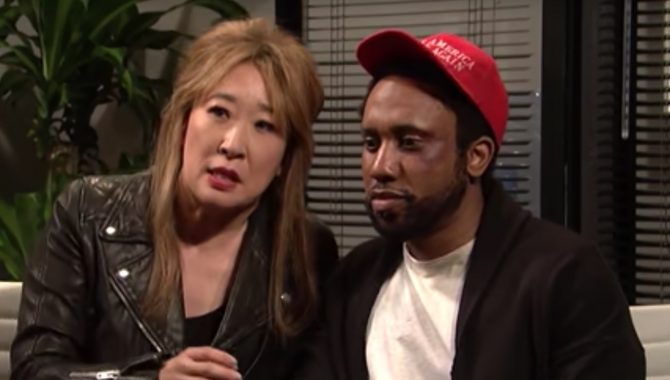 The laughs were few and far between during a sketch from Saturday Night Live over the weekend that tackled the aftermath of the Jussie Smollett story.

Featuring host Sandra Oh as Jussie’s agent, the three-minute skit (it feels like 10 minutes at least) imagines a meeting at the Empire office in which Smollett, cleared from all legal charges after allegedly faking a hate crime, attempts to secure his job playing Jamal Lyon, the out musician and middle son of the Lyon family.

The entire skit is a riff on the boy who cried wolf. Jussie is late for the meeting and launches into an excuse as to why. You already know where this is going.

“Guys, you are not going to believe what just happened to me,” Smollett, played by Chris Redd in a MAGA hat, says. “I got attacked again!”

Then he starts pulling out “clues” from a plastic bag that prove he’s telling the truth, while saying things like, “You can’t fire me, I made this show, man. I’m the gay Lee Daniels!”

“Jussie, I’m the gay Lee Daniels,” replies Kenan Thompson as the famed producer in one of the only sort-of funny moments.

We’re not saying the Smollett saga should be off-limits to satire — we need to process it all somehow, and comedy can certainly help dissolve tension around a painful topic.

Related: Now Jussie Smollett’s lawyer says his attackers may have been wearing whiteface

But the skit felt much more awkward than insightful, opting to paint Smollet as a clown-like, pathological liar rather than reaching for any kernel of truth from the psychology of what would make Smollett decide to do what he allegedly did.

Of course, that truth is exactly what’s left everyone who followed the story so baffled, so it’s not exactly an easy target.