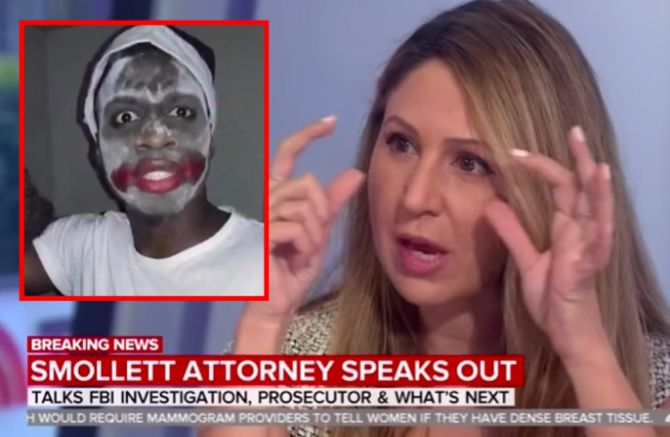 Jussie Smollett’s lawyer, Tina Glandian, appeared on the TODAY show this week to explain why her client mistook his alleged attackers for being white when they were actually black.

In an interview with Savannah Guthrie yesterday, Glandian suggested that the reason Smollett didn’t recognize his alleged attackers, who are believed to be brothers Abel and Ola Osundairo, was because they were in “disguise.”

What sort of “disguise,” you ask?

In his police report, Smollett claimed one of his attackers was wearing a ski mask but he saw “pale or white skin” around the eyes.

“He only saw one of the attackers,” Glandian said. “One of them he didn’t see. He saw one through a ski mask. Again, he could not see their body. Everything was covered, and he had a full ski mask on except the area around the eyes.”

“He thought it was white or pale skin, that’s what he initially said,” she continued. “Obviously, you can disguise that. You can put make-up on.”

In an effort to prove her absolutely bonkers theory, Glandian pointed to a 2016 YouTube video featuring Abel Osundairo wearing white makeup as he performs a Joker monologue.

“There’s a video,” she said. “It took me all of five minutes when I was looking into the brothers, to of one of the brothers in whiteface doing the Joker monologue.”

“He at this point again has been victimized much more by what’s happened afterwards than what happened that night.”

Related: Jussie Smollett may sue the city of Chicago; that’ll go over well