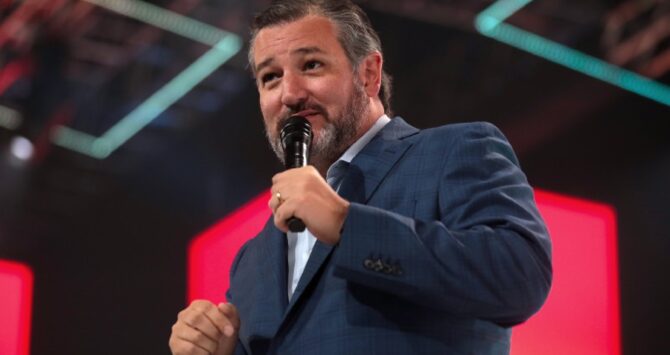 Cruz made the comments at a rally in Nevada on Saturday.

Here’s the video of Ted Cruz joking that Elizabeth Warren might have a penis. @lawindsor pic.twitter.com/eZsQvVPD7Q

​​“Elizabeth Warren told reporters that guy came up to her and said, ‘I would have voted for you if only you a had a penis’,” Cruz said.

“Number one, that story is a lie. Produce this fictional person, because this human being does not exist. That’s not even 1/1024th percent true.

“But number two, in today’s Democrat Party, who do we know she doesn’t? Like for Democrats, how could you possibly know?”

“By the way, most Americans know this is ridiculous,” he continued. “Lia Thomas is a dude! He looks like Michael Phelps.”

Related: Ted Cruz tries to mock queer people by announcing his new pronouns, looks like a complete idiot instead

This is not the first time Cruz has touched upon trans issues. Last month, at a Turning Point event, Cruz told the audience, “I’m Ted Cruz, and my pronoun is ‘kiss my ass’.”

Cruz has also voiced support for Florida’s ‘Don’t Say Gay’ bill and criticized Disney for its moves towards LGBTQ inclusivity. During a podcast in April, he baselessly suggested Disney was forcing gay sex on its audience: “In every episode now, they’re gonna have Mickey and Pluto going at it.”

Related: Ted Cruz says Mickey Mouse and Pluto are having tons of gay sex and we’re all a little dumber now

Well, if she does, that would make one of them. All Ted’s got is a pair of lips plastered against Trump’s treasonous ass.

The only penis in Ted’s possession is his phallus for a proboscis.

They are so obsessed with other people’s sexual parts. What’s up with that?

What is he doing in Nevada anyway? We never see him here in Texas, but sure did see Beto with 2,500 other Texans today.

Why does every Republican rally sound like a Netflix comedy special? It’s like they’re just up there telling random crazy unreal jokes and people are like, “damn right!”.