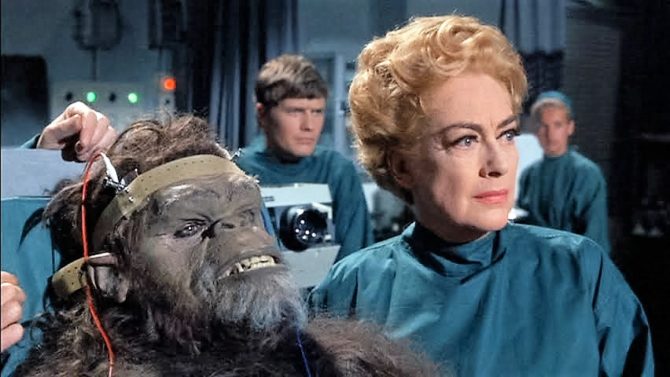 FX’s Feud aired its final episode of the season last night, and (spoiler alert) fans hoping for one final epic shadefest between Bette Davis and Joan Crawford were instead taken on a rather uncomfortable journey into the abyss of the screen legends’ careers.

For Crawford, that meant delving into the world of Trog, her final film. While the 1970 picture wasn’t her last acting gig (she is credited with some TV appearances), the show makes it out to be the final straw in her long and turbulent career. In Feud, Crawford fights early on to be cast as a scientist — specifically, Marie Curie. The plan fails, and in Trog she finally gets to play one. It’s not exactly what she’d hoped for.

And thanks to the internet, we can catch a glimpse at what the real-life film looked and felt like.

The irony is that Crawford delivers a pretty solid performance in what is otherwise a total B movie.

And here’s Joan giving it her all while having to say “Trog” with a straight face and acting against a cheap Bigfoot costume:

When John Waters introduced a screening of Trog last year, he delighted in telling the crowd that, “[Crawford] treated this as if it was the most serious movie that was ever being made.”

Related: Olivia de Havilland was asked if she watches “Feud” and her rejection letter is priceless

He then went on to read some of the reviews and gossip that were written around the time of production, many of which made it into Ryan Murphy‘s Feud.