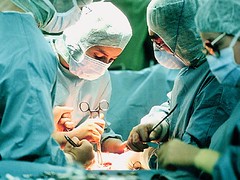 Sweden apparently has a 1972 law on its books where in order to get a sex-change operation you have to be over 18-years-old, a Swedish citizen, be unmarried and get sterilized. We have no idea how this law made it onto the books, but it came about at a time when Sweden forced sterilization on 63,000 mentally disabled people, epileptics, and people with alleged social problems so that they could get married or be released from mental institutions.

So… that means that Sweden thinks only people with mental problems want a sex change? Ugh.

The National Board of Health and Welfare and Liberal Party want the sterilization requirement revoked but the Christian Democrats and the Sweden Democrats want to keep it. Swedish Democratic minister for children and the elderly Maria Larsson said, “A sex-change means that you willingly subject yourself to treatment in order to change your gender, and if you do that it is also reasonable that you give up some gender-specific properties of your old sex.” But she’s getting pushback from her own party. Fellow party member Olle Sandahl recently said in a speech, “This is state-imposed surgery that is mandatory in a certain situation, a mutilating surgery, and you should have very strong reasons to force that on people,” said party member in a speech.