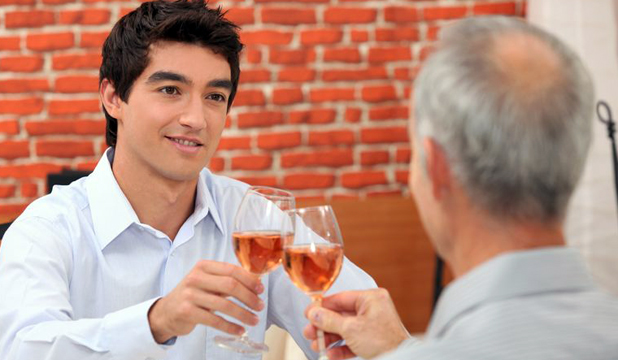 A woman overheard a gay men talking about his “daddy” at a party and didn’t understand what he meant, so she’s written a letter to gay advice columnist Hank Scott asking him to explain.

“I was at a party the other night and overheard two gay men in their early 30s talking about the boyfriend of one of them,” her letter begins. “One guy said to the other: ‘So how’s the relationship going with daddy?’ Apparently he was referring to the other guy’s boyfriend, who was at the party and appeared to be in his mid-50s!”

Apparently the woman isn’t familiar with the concept of May-December relationships. But all she needs to do is look at our current President and First Lady to understand.

She continues, “Daddy? Isn’t that a creepy, and maybe perverse, way for someone to refer to his boyfriend? It conjures up images of incest and pedophilia.”

The woman goes on to say that her husband is five years younger than she is. “If he ever called me ‘mommy’ I’d put a diaper on him and kick him to the curb!” she insists.

“The ‘daddy’ phenomenon isn’t that unusual, no matter one’s sexual orientation,” he writes. “After all, I’m sure you know that (rich) straight men sometimes end up in relationships with much younger women.”

He points to Playboy founder Hugh Hefner who, at age 76, married 26-year-old Crystal Harris as just one example of this.

Related: 90-Year-Old Grandfather Finds Love Once Again… In A Man 50 Years His Junior

Hank continues: “In gay life, the so-called ‘daddy/son’ or ‘daddy/boi’ relationship really has no connection with incest or pedophilia. There are ‘bois’ or ‘sons’ in their 40s with ‘daddies’ in their 60s. ‘Daddies’ are those men attracted to younger guys who they want to mentor and support emotionally (and sometimes financially — a ‘sugar daddy’).”

“Of course there’s also the aspect of sexual attraction, at least for the older guys, who are more likely to be smitten by well-defined abs than wise wrinkles,” he adds. “There’s a significant minority of young gay guys who are seeking older partners, witness the popularity of websites such as Daddyhunt and its related telephone app, Mister.”

Hank concludes by saying that he himself is often referred to by younger gay men as “daddy.”

“I’ve found it’s important to set age limits,” he says. “My formula? Never date a guy younger than my age divided by two plus one year (example: If you’re 50, the cutoff is 26). I give extra credit (i.e. accept younger guys) for military service, a graduate degree or the ability to speak two or more foreign languages. And by the way, I’m single!”

Related: QUESTION: What Do You Think Of The Idea Of Intergenerational Relationships?