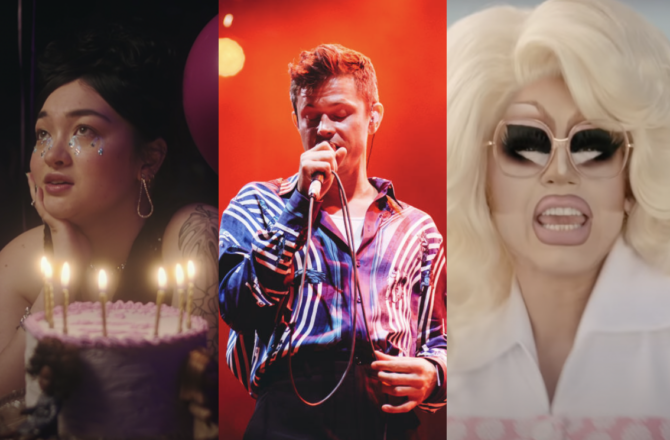 Summer is right around the corner, and once again queer (and queer-adjacent) artists are ready to carry the music industry on their backs. After two years of plastic-shield drag brunches and Pride celebrations over Zoom, the community is officially ready to act up this Summer, and we’ve got just the soundtrack for it. From fresh newcomers like Madison Rose to the incomparable queen Madonna, we’re being blessed with a festival’s worth of new music to love.

Here’s a roundup of seven albums that we can’t wait to jam out to this Pride season and beyond. Happy streaming!

Matron saint of mental health bedroom pop mxmtoon is set to kick off the summer with a newly upbeat sound. Rising singles “sad disco” and “victim of nostalgia” deal in mxmtoon’s regular realm of loneliness and yearning, this time wrapped up in catchy pop beats – perfect for her sizable Tiktok following’s propensity for both dancing and crying.

Technicolor by Madison Rose (May 27)

Queer up-and-comer Madison Rose is just starting to make an impact, but her sound – especially new rainbow-drenched single “Technicolor” – seems like it was engineered in a lab to headline LA Pride in the Park. Her other singles show she has the range; “Better Off Alone” feels like a club mix classic, while “ICONIC” is a ballroom-style bitch track from a girl who is feeling every single oat she has. Between this set of hits-to-be and visible star quality, Ms. Rose may just be set to storm the girls.

If you prefer a bit more of a toned down summer, we’ve got you covered. A decade out from her debut album Half Way Home, recently out singer-songwriter Angel Olsen is set to return to her indie-folk roots in Big Time. Her new titular single is folksy as they come, sounding like a soft sapphic love in the lazy heat of the countryside. This is sure to be a satisfying summer album for lovers of sweet tea, cicada nights, and Brandi Carlile.

After seven singles to date since his last album, Conan Gray fans are absolutely aching for Superache to be released. Gray has built a career on penning pop hits for the melancholy queers of Tiktok and Tumblr, and his new gender-dubious heartbreak tunes like “People Watching” and “Memories” are sure to keep up the good work. Those who lean more bop than ballad can keep “Overdrive” and “Telepath” in rotation – though here’s hoping they don’t get left in the infamous non-album single pile.

You know her. You love her. You probably have a messy party story from your 20s that featured a song of hers in the background. Madonna has soundtracked decades of gay moments, and her upcoming remix album sees Ms. Ciccone ready to teach a masterclass on just that. Finally Enough Love drops as an abridged 16-track version just in time to close out Pride month, with a 50-track follow-up set for release on August 19th. Whether you’re a “Material Girl”, a “Girl Gone Wild”, or just a “Beautiful Stranger”, Madonna’s sure to have us all as hung up on her as ever.

If Muna’s earnestly sapphic lead single “Silk Chiffon” with new label-mate Phoebe Bridgers is any indication, Muna is going to be iconic enough to earn its eponymous title. Muna’s always had their share of “windows down, stereo up” sleeper hits like “Stayaway” and “I Know A Place” (the latter of which featured heavily in queer rom-com Alex Strangelove), but their brighter electro-pop moments like recent single “Anything But Me” will no doubt make for perfect Pride playlist entries.

Drag mega-star Trixie Mattel has announced two joint albums for summer release: The Blonde Album featuring new single “C’mon Loretta” and The Pink Album featuring “This Town” with Americana artist Shakey Graves. “C’mon Loretta” is a garage-pop ode to country star Loretta Lynn with an infectious, driving beat you can’t help but move to, while “This Town” keeps it more lowkey and heartfelt. Mattel holds herself primarily as a musician, but between her upcoming Discovery+ show “Trixie Motel”, her webseries “UNHhhh”, and about a dozen other projects, our fingers are crossed that she has time to release these albums at all.