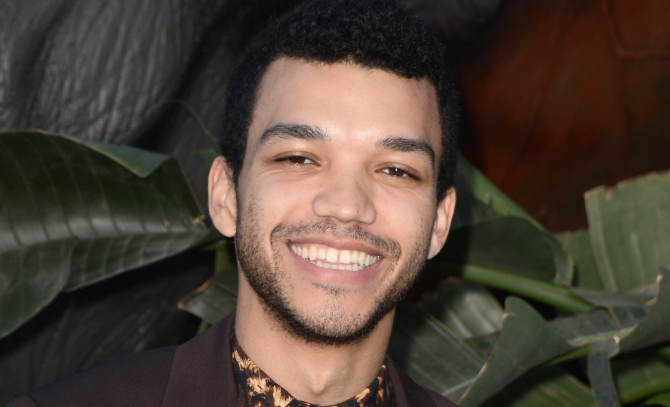 This profile is part one of Queerty’s 2020 Out For Good series, recognizing public figures who’ve had the courage to come out and make a difference in the past year, in celebration of National Coming Out Day on October 11.

Bio: Actor Justice Smith’s breakout performance in the lead role of Ezekiel Figuero in Netflix‘s The Get Down launched his career, and not one year later he found himself profiled on Forbes Magazine’s “30 under 30” list. Stage and screen gigs continued to roll in, including roles in the blockbuster sequel Jurassic World: Fallen Kingdom, Detective Pikachu, and All the Bright Places opposite Elle Fanning.

Coming out: In a June Instagram post, Smith revealed that he is queer and dating fellow actor, Nicholas Ashe. Smith said that he and Ashe had attended a rally in New Orleans together to protest the death of George Floyd at the hands of Minneapolis police two weeks earlier. He said that he noticed some fellow protestors were wary of chanting “Black Trans Lives Matter.”

“There is so much tragedy on the timeline these last couple of days so I added some photos of me and Nic to show some #blackboyjoy #blacklove #blackqueerlove ❤️🧡💛💚💙💜 You’ve been my rock and guiding light through all of this and I love you so much. I know that on the other side of this Is change, though the fight is far from over.”

How his family grew: In being so open about his relationship and vocal about trans inclusion in the BLM movement, Smith connected with fans in a profound way, growing his community along the way. Folks had plenty to despair about in the summer of 2020, but Smith lifted others by utilizing the power of his voice and the beauty of his love with Ashe. His post racked up nearly 130K likes, with hundreds of followers commenting with heart signs and messages of gratitude for sharing positivity in a troubling time.