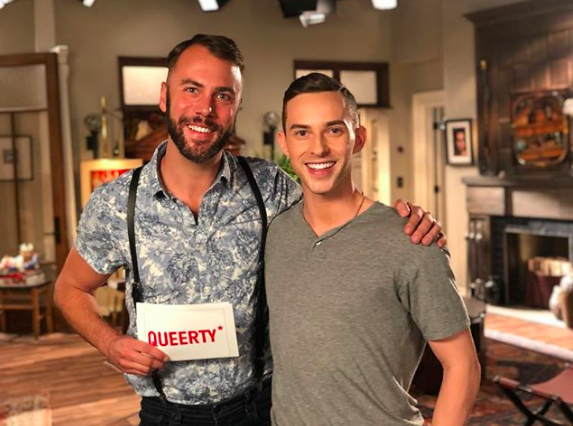 This just in: Adam Rippon is officially an American treasure.

The 28-year-old skater, who became the first out gay U.S. male athlete to win a medal in a Winter Olympics when he took home the Bronze at this year’s Games in South Korea, has donated his Olympic costume and skates to the Smithsonian Institution’s National Museum of American History.

Rippon made the exciting announcement on Twitter yesterday, writing: “Pretty cool to soon have something on display in the American History Museum. Now, I just need to convince someone that they need to be next to the ruby slippers.”

I officially donated my Olympic costume to the @smithsonian today. Pretty cool to soon have something on display in the American History Museum. Now, I just need to convince someone that they need to be next to the ruby slippers. pic.twitter.com/YIgkSBcyXv

Since competing in the Olympics, Rippon has nabbed a super cute Finnish boyfriend, was named one of Time’s “100 Most Influential People,” won Dancing With the Stars, and will make an appearance in the upcoming season of Will & Grace.

Honey, what’s this? @adaripp is guest starring on an episode of the upcoming season of @nbcwillandgrace and @johnhalbach got to interview him for #Queerty on set. Stay tuned for the interview (and some other cool stuff we’ve got planned) COMING SOON! ? #AdamRippon #WillAndGrace

This makes me feel so emotional and I can’t even explain why ?

Congrats to you. Well deserved . And they should move the ruby slippers next to you ???

It is the MOST BEAUTIFUL men’s costume in history of skating. @LisaMckinnonUSA