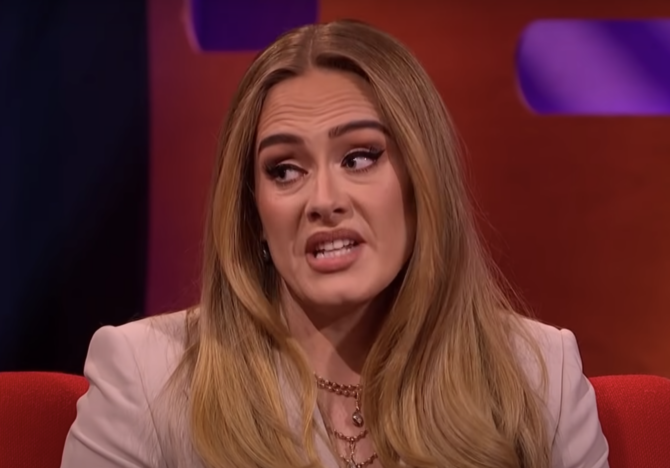 Subsequent to her pole-dancing appearance at London club G-A-Y on Thursday, Adele popped by The Graham Norton Show for an interview, during which she addressed rumors around her postponed Las Vegas residency, quashing rumors of its imminent cancelation.

Adele had previously blamed “COVID-related delays” for the sudden postponement of her Weekends with Adele show that was set to premiere at Caesar’s Palace on January 21. She nixed the opening just one day before, leaving fans disappointed and Caesar’s Palace staff scrambling to find a replacement. Rumors quickly circulated that the show would be canceled altogether.

Now, she’s clearing up those reports.

“I tried my hardest and really thought I would be able to pull something else together in time, and that was why it was so last minute,” she explained to Norton. “I regret that I kept going until that late in the day. But it just wasn’t ready.”

The singer once again blamed delays stemming from COVID as a reason why “some things weren’t going to be arriving until the day of the show”.

“It just would have been a really half-arsed show, and I can’t do that,” she continued. “People will see straight through me, up on stage being like, ‘She doesn’t want to be doing this.’ And, I’ve never done anything like that in my life. I’m not going to start now, you know? I’m obviously gutted.”

Norton then asked her point-blank as to why she couldn’t have done a scaled-down version of the planned residency to keep the show running.

“I’m not going to try do a stadium show in a theater, but it’s Vegas,” she said. “It can’t just be me on my f*cking guitar.”

Then she added, “We’re working our arses off, literally 24 hours a day, but I don’t want to announce a new set of dates until I know everything will definitely be ready. It has to happen this year because I’ve got plans for next year. Imagine if I have to cancel because I am having a baby.”

For the record, we’re not sure if that means Adele is pregnant already, or if she’s just planning ahead.

Meanwhile, as the singer continues to do damage control, she’s still taking Las Vegas by storm, in a manner of speaking.

Express UK reports that longtime Adele impersonator Janae Longo has become one of the hottest acts in town, as fans rush to pack the Legends in Concert Theatre at the Tropicana.

Watch Adele’s interview with Graham below.