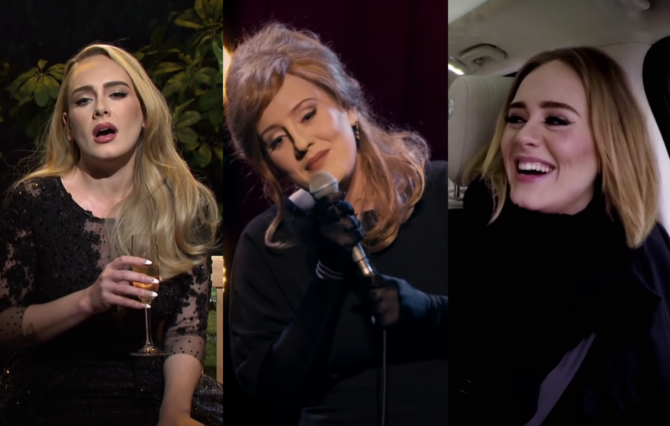 Recent news of Adele’s Caesars Palace cancelation has sparked gossip and disappointment among her biggest fans.

Many allege the “Easy on Me” singer canceled her Las Vegas residency to focus on her relationship with boyfriend Rich Paul. Inside sources recently claimed, “She and Rich had been fighting, and their relationship was volatile before she canceled her dates.”

Adele has since come forward to squash those rumors, saying the cancelation was due to logistical delays and COVID-19 exposures among the crew.

As long-time fans of the UK’s most dazzling songbird, we wanted to shift the spotlight away from all the negative headlines she’s been receiving for a second and celebrate Adele’s most loveable moments.

Now, without any further ado…

“All I Ask” on The Ellen Degeneres Show

Leave it to Adele to make you miss a man you never even had. The emotion, the power, the mournful look in her eyes–this is the performer at her absolute best. Also, this is the performance she deserved to have at the 2016 Grammys, but due to sound problems, her song came out a bit flat. She was disappointed, but she came back a couple of days later with this act of redemption.

That time she helped a man propose

In her 2021 CBS Special “Adele One Night Only,” Adele helped a young man pull off the proposal of the century. She told the audience not to make a peep as the soon-to-be-fiance led his longtime girlfriend onto the stage. A setup like that? Of course, she said yes! And to top it all off, Adele serenaded the couple with “Feel My Love” for a truly unforgettable moment for the start of their lives together, proving that she is not all about heartache. She has a sweet side as well.

That time she did “Carpool Karaoke” with James Corden

Speaking of Adele’s sweet side, this video is a pure joy to watch. We dare you to press play and not crack a smile. She and James went back and forth between bantering and singing in perfect harmony. Part of the reason we all love Adele so much is that she seems like a “normal” person. She’s someone you can have a pint and sing karaoke with.

Adele’s breathtaking performance at the BRIT Awards helped solidify this heartbreaking ballad in the annals of pop history. If you turned on your car radio during the months following, this track was playing on every pop station every 20 minutes. The relationship she sang about might not have lasted, but this song certainly did.

“Rolling In The Deep” Live at Royal Albert Hall

“Rolling in the Deep” was the rocket that took this superstar to new heights. Imagine being able to write such an evocative anthem at just 22 years of age! In her 2011 Royal Albert Hall rendition, she reaches the end of the night and warns the audience that she might need their help singing the song. Clearly, this is just a ploy as the chanteuse blows the crowd away with her awe-inspiring belt.

(P.S. A few months after this performance in 2012, Adele had to re-examine the way she sang this song after undergoing vocal surgery. She had developed a polyp on her vocal cords that later hemorrhaged. This may be one of the very last recordings of her singing it in the original style.)

That time she auditioned to play herself

In this video, Adele is really putting on a performance. She wears prosthetics, changes her makeup, even tones down her recognizable accent. As she nervously waits in line for her audition, she has everyone convinced that she’s a woman named Jenny. If Adele didn’t have such an amazing career as a singer, she could have totally made it as an actress.

“Chasing Pavements” live at Billboard in 2008

Time for a throwback. Before she had her trademark eyeliner look and glamorous style, Adele was a young, mouthy songwriter from Tottenham with a voice and a dream. This early live recording captures that essence. Here she is, no makeup, in a beanie, performing in a video that looks like it could have taken place in your local coffee shop. The video was recorded inside the Billboard offices in NYC at the beginning of her first US tour before she became a household name. She then went on to cancel the second half of her 2008 US tour to be with a former boyfriend. She told Nylon magazine in June 2009, “I can’t believe I did that.” So, it’s not totally off-base to wonder about the motivations behind her recent tour cancelation.

Adele made werking from home cool before it was the popular thing to do. In this 2011 recording, she talks about her inspiration behind the seminal track “Someone Like You” and gives an intimate, cinematic view into her private life. Unmade beds, picture frames, her reflection in an antique mirror, this music video’s aesthetic is almost as moody as the song itself.

That time she hosted SNL

She can sing, she can act, she’s drop-dead gorgeous, this lady has it all. Adele has already proven she can keep a straight face in character, and now she’s showing us her comedic timing is on point, too. We’re ready for her Broadway musical revue.

Last but not least… Her latest hit, “Easy On Me,” is the accumulation of years of hard work, raw songwriting talent, and powerful vocal ability. In this 2021 performance at the NJR Music Awards, Adele steps into the spotlight after the release of her chart-topping album “30,” looking absolutely flawless in doing so. Maybe we could take a cue from her lyrics, go easy on her in light of recent rumors, and stop speculating about her love life. After a brief pause to regroup and organize, she’s sure to give us more jaw-dropping performances like these in the year to come.