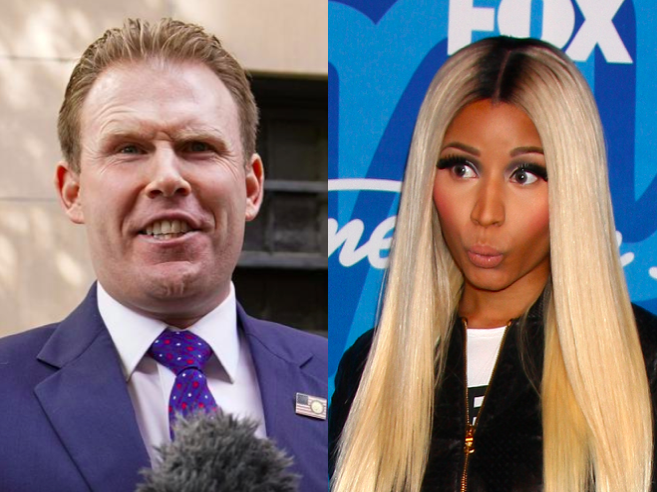 Singer Nicki Minaj sparked an international outcry this week when she falsely claimed her cousin’s friend in Trinidad became impotent from taking the COVID-19 vaccine. Doctors, experts, believers in science, and even the White House were quick to debunk the claims. But at least she has New York gubernatorial candidate Andrew Guiliani in her corner.

“His testicles became swollen. His friend was weeks away from getting married, now the girl called off the wedding,” the 10-time Grammy nominee tweeted on Monday.

My cousin in Trinidad won’t get the vaccine cuz his friend got it & became impotent. His testicles became swollen. His friend was weeks away from getting married, now the girl called off the wedding. So just pray on it & make sure you’re comfortable with ur decision, not bullied

Yesterday, Giulinai tweeted his support for Minaj, as well as other conservative-leaning Black celebrities who he says get “trashed” by the media for speaking out against “Democrat Group-Think.”

“Any black celebrity who disagrees with the Democrat Group-Think gets absolutely trashed by the Leftist Media. See @kanyewest, @icecube, @lilwaynehq_2, not to mention @larryelder,” he tweeted.

Any black celebrity who disagrees with the Democrat Group-Think gets absolutely trashed by the Leftist Media. See @kanyewest, @icecube, @lilwaynehq_2, not to mention @larryelder.

This is ? on ? @NICKIMINAJ, keep speaking your peace! https://t.co/ijmVZn8B2y

Except that Minaj’s “peace” is simply untrue. The COVID-19 vaccine does not make your balls swell up or cause impotency.

Trinidad’s Health Minister issued a statement yesterday saying there are absolutely no reports of anyone on the Caribbean island suffering swollen testicles as a result of the COVID-19 vaccine.

When Dr. Anthony Fauci was asked about Minaj’s tweet, he politely suggested she “think twice” before sharing baseless claims with her nearly 23 million Twitter followers.

“I’m not blaming her for anything,” he said, “but she should be thinking twice about propagating information that really has no basis as except a one-off anecdote, and that’s not what science is all about.”

And the White House even offered to have its doctor call Minaj to answer whatever questions she might have about the vaccine.

You do realize the swollen testicle thing was a lie

— Kindle Cousins read it all but thrive in the DARK (@KindleCousins) September 16, 2021

You know the names of five black people. Congratulations.

Please go away forever. She spread misinformation & tried to back track when we got in her ass for it. Trinidad wasted resources & time because of her incorrect statement. She isn’t getting trashed because she’s being open minded. She’s getting trashed cause she lied

@NICKIMINAJ, you’ve hit a new low when you have dumb disingenuous racist MFs like this ^ and @TuckerCarlson exploiting you.🤦‍♂️

Your father was a hero and now he is a drunk zero!!

Minaj says that she now plans on getting the vaccine… so she can go on tour again.