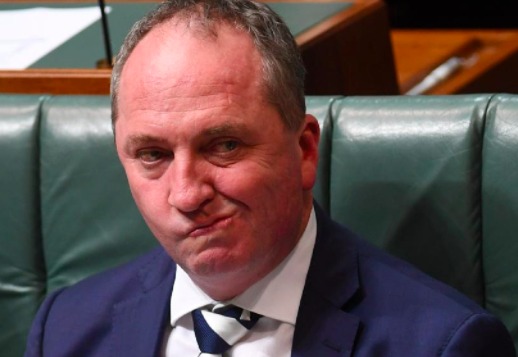 Barnaby Joyce is a conservative politician from Australia. Last year, he was one of the loudest opponents of same-sex marriage during Australia’s never-ending debate over marriage equality.

Now Daily Telegraph reports that the entire time Joyce was railing against the corrupt morals of gay people, he was cheating on his wife with a former staff member.

Not only that, but now the ex-staff is pregnant.

Joyce, who once claimed same-sex marriage would damage cattle exports, told 730 ABC: “Well, what I want to do is make sure private matters remain private. Quite obviously, I don’t think it benefits anybody to drag private matters out into the public arena.”

When asked how he responded to charges of being a hypocrite after spewing nonsense about the sanctity of marriage while sneaking around on his wife, Joyce replied: “How could that be?”

“Just because my marriage didn’t work out, doesn’t mean I disregard what marriages are about.”

He continued, “But I’m not going to start saying ‘Well therefore, I’m gonna say that because I failed, I’m going to completely change my views and definition.'”

Joyce’s wife Natalie told media, “The situation is devastating, for my girls who are affected by the family breakdown and for me as a wife of 24 years who placed my own career on hold to support Barnaby through his political life.”

She added: “Naturally we feel deceived and hurt by the actions of Barnaby and the staff member involved.”

The lovechild is due in April.

Related: A peek back at the filthiest, wackiest, wildest political sex scandals of 2017