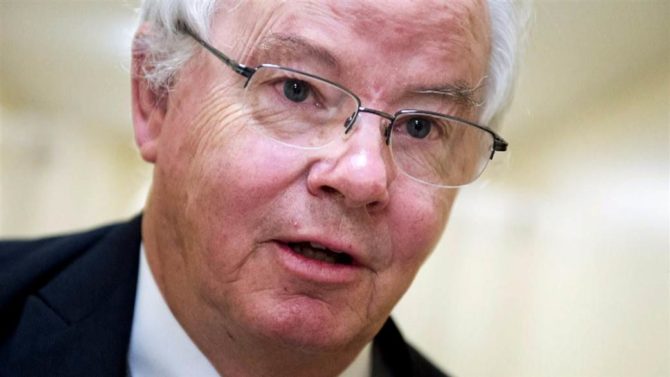 Last week, the internet was cursed with an explicit photo of the 68-year-old lawmaker, plus a 53-second video and screenshot of a sext he wrote that said, “I want u soo bad. Right now. Deep and hard.”

Now, the Washington Post has gotten its hands on a transcript of a recorded phone conversation between Barton and the woman he sent the explicit material to after their affair had ended.

In the tape, Barton, who is the longest-serving member of the Texas House delegation, can be heard threatening the woman with a police investigation if she doesn’t delete the pictures and videos he sent from his government-issued phone.

“I want your word that this ends,” Barton says. “I am ready if I have to, I don’t want to, but I should take all this crap to the Capitol Hill Police and have them launch an investigation.”

To which the woman replies: “Why would you even say that to me? The Capitol Hill police? And what would you tell them, sir?”

I would tell them that I had a three-year undercover relationship with you over the Internet that was heavily sexual and that I had met you twice while married and had sex with you on two different occasions and that I exchanged inappropriate photographs and videos with you that I wouldn’t like to be seen made public, that you still apparently had all of those and were in position to use them in a way that would negatively affect my career. That’s the truth.

After transcript leaked, Barton issued a statement saying it was further evidence of a “potential crime against me.”

“This woman admitted that we had a consensual relationship,” Barton continued. “When I ended that relationship, she threatened to publicly share my private photographs and intimate correspondence in retaliation.”

But the woman maintains it was never her intention use the pornographic materials against Barton. She merely shared them with another person, who took it upon themselves to post them to Twitter.

When asked how the relationship began, the woman explains that they first connected on Facebook in 2011 while Barton was still married to his second wife. He quickly began flirting and making suggestive comments. Then he started sending her unsolicited dick pics.

They first slept together in 2012 after Barton paid for her to fly down and visit him in Washington, D.C. They slept together a second time in 2014. Barton remained married to his second wife until February 2015.

“It’s not normal for a member of Congress who runs on a GOP platform of family values and conservatism to be scouring the Internet looking for a new sexual liaison,” the woman says.

Barton has since made good on his promise to get the Capitol Hill police involved. An investigation into the leak is currently underway.