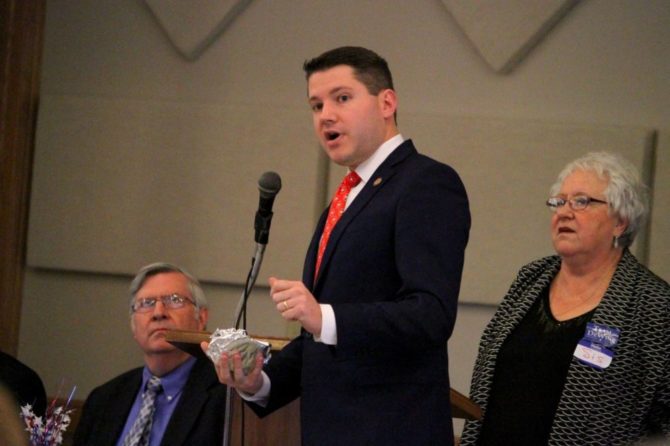 When it rains, it pours.

After several screenshots of sexually-charged conversations between himself and several other men leaked online, disgraced Ohio GOP lawmaker Wes Goodman is facing a fresh dump of damning documents.

The Washington Post just got its hand on several emails and other never-before-released documents describing an unwanted sexual encounter involving Goodman and an 18-year-old boy at a 2015 fundraiser for the antigay Council for National Policy.

According to the documents, Goodman, who was 31 at the time, first approached the teen and his friends outside a Ritz-Carlton ballroom and invited them to join him at a party on Capitol Hill.

“One of the young guys didn’t want to go, and Wes really made fun of him and told him he ‘had a vagina’ and made sarcastic remarks about him being like a woman,” the teen wrote in a statement.

The teen agreed to go to the party. Afterwards, he and Goodman returned to the Ritz-Carlton where, he says, “Wes pushed me to come to his room.”

Goodman allegedly offered to let the teen share his bed.

In his written statement, the young man says he woke up at at around 4 AM to find Goodman “pulling down my zipper.” His pants had also been unbuttoned. Goodman then began fondling him. That’s when the teenager jumped up and ran out of the room.

“I was shaken, dazed, confused and very upset,” he wrote.

The teenager eventually told his parents, who demanded Goodman be removed from the organization.

“If we endorse these types of individuals, then it would seem our whole weekend together was nothing more than a charade,” the teen’s stepfather wrote to Tony Perkins, head of the Family Research Council and president of the Council for National Policy, in an email.

To which Perkins replied: “Trust me .?.?. this will not be ignored nor swept aside. It will be dealt with swiftly, but with prudence.”

More documents show that when confronted by Perkins about the incident, Goodman acknowledged inviting the teen back to his hotel room, but denied molesting him in his sleep, saying he merely woke up around 8 AM to find the young man was “gone.”

In an email exchange, Perkins pressured Goodman to drop out of the race for the Ohio House of Representatives and suspended him from the council.

“Going forward so soon, without some distance from your past behavior and a track record of recovery, carries great risk for you and for those who are supporting you,” Perkins wrote.

Goodman continued his campaign, during which he touted the important of “natural marriage,” and eventually went on to win his seat last year. He abruptly resigned from the job earlier this month after being caught having sex with a male in his office.