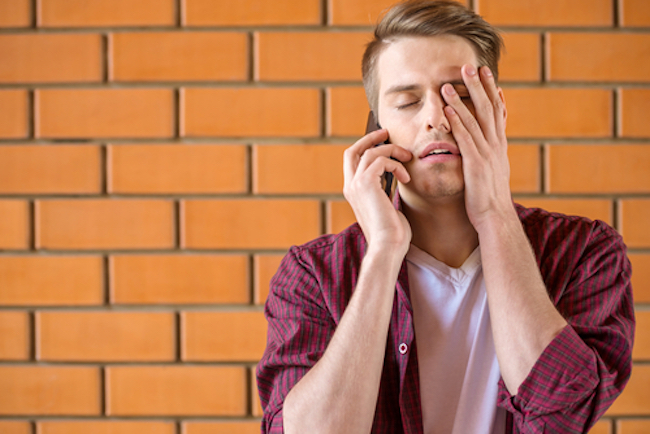 It can be so difficult to have roommates, particularly when they happen to be confirmed practitioners of chaos magick. Such people exist and walk amongst us.

So when it looked like his date was heading to that place you want your dates to go, this guy discreetly popped into the bar’s bathroom and tapped out a text, asking his roomie to straight the place up a bit.

Related: When It Comes To Roommate Hookups, LGBTQ People Seem To Do It Better

So far, so predictable. This is the exact predicament a young man named Thom from Long Island, New York recently found himself in. After sending his text, he crossed his fingers and hoped for the best — but he crossed the wrong roomie and got bested instead.

That roommate’s name is Deno. Goddamit, Deno. What the shit, Deno? Deno has no chill.

This Deno character agreed to clean up the pad, but he had a more nefarious plot in mind. For reasons best left between Deno and his patron of the black arts, Beezelebub, he got to work — creating an outlandish shrine in the bedroom for none other than the late Princess Diana.

Roommate has date coming by later and asked me to clean bc he's not home. So I made a Princess D shrine in his room pic.twitter.com/wfOeVUm7yW

Deno subsequently loaded the above photo to Twitter, and it’s become the viral sensation he hoped for. And yes, that’s a fire we’re choosing to stoke ourselves — since we currently live with roommates who are the human equivalent of an eyelash caught behind a contact lens.

Of course, Twitter is going straight-up ‘nanas for it. One fan wrote: “This is pure gold. He should be dating YOU.”

We’re not sure how we’d react to getting to a stranger’s home and finding a Princess Di shrine. We’d probably panic and then immediately proceed to fellate him. Turns out Thom’s date was a good sport.

“The date he was bringing home is aware of the situation at our place,” Deno writes, “so neither party was particularly shocked when they found the shrine. We all had a good laugh and then it was back to business as usual.”

In that house, business as usual probably means kneeling down before a touching tribute to the first wife of Charles, Prince of Wales.