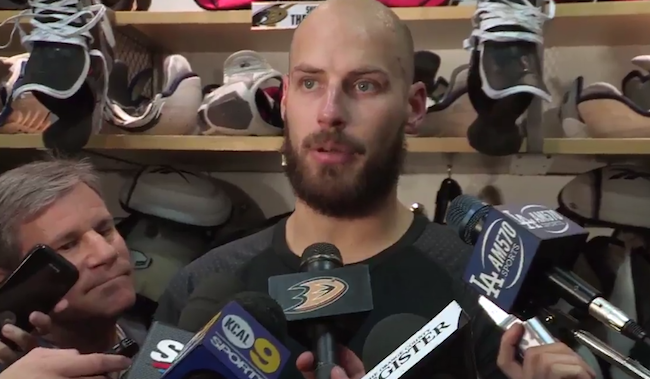 The Anaheim Ducks hockey player was fined $10,000 by the NHL after he exclaimed “c*cksucker” during a playoff game.

So now, fans of the Ducks have launched a GoFund Me page to help him pay the fine.

We should probably mention that Getzlaf takes home $9.25 million a year.

Related: Hockey Player Brock McGillis: “I Lived A Life Of Denial, Because I Am Gay”

Ryan Getzlaf was unfairly given the maximum fine by the sinister NHL for accurately calling a ref a rooster vacuum. Now if everyone donates just $1 we can raise enough money to send a message to the NHL that no more will this kind of snowflake over reaction to words stand. If we are able to raise enough money it can go to the ducks captain to give to a local charity of his choice. Let’s make 10k go somewhere it’s going to do some good (instead of the players association fund). At any rate I ask all ducks fans and all Bettman haters to unite and undue this terrible injustice! Ducks fly together!

After calling the referee a c*cksucker, Getzlaf released the obligatory sorry-not-sorry statement, as USA Today reports.

“I’ve got to be a little bit more responsible with the words I choose.

As a father and as somebody that takes a lot of pride in this game, and the respect for it, it’s tough to see somebody refer to it as what TSN did.

I didn’t mean it in that manner in any way, and for that to go that route, was very disappointing for me.

I understand it’s my responsibility to not use vulgar language-period. Whether it’s a swear word or whatever it is, we’ve got to be a little bit more respectful of the game and that’s up to me and I will accept that responsibility and will move forward.”