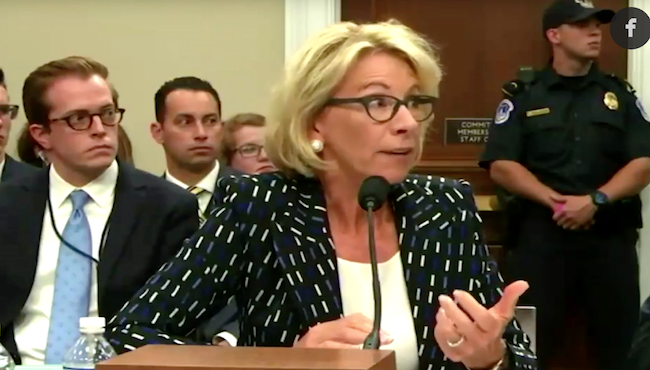 Prodded in January about why her name appeared on documents tying her to thirteen years of antigay discrimination, she shrugged it off as a “clerical error.”

During her confirmation hearing, she couldn’t altogether confirm that she was against guns in schools, druggily saying that “I would imagine that there is probably a gun in the schools to protect from potential grizzlies.”

Her reign of stupidity continued on Wednesday, with DeVos opining that states should be allowed to decide whether their schools can discriminate against LGBTQ students — even if those schools were given federal money.

DeVos’s budget requests a $250 million increase for projects that include private school vouchers, which led Clark to ask if she’d step in if a school like Lighthouse Christian Academy applied for that funding.

Her response? She believes in giving flexibility to states:

“For states who have programs that allow for parents to make choices, they set up the rules around that.”

Looking mystified, Clark pressed DeVos further, asking if she saw any situation in which she’d overrule a school asking for federal voucher money.

What if they discriminated against students based on race? Special needs? Sexual orientation?

Related: Bear foe Betsy Devos gets memed and mocked as she’s handed the keys to our children’s futures

“The Office of Civil Rights and our Title IX protections are broadly applicable across the board. But when it comes to parents making choices on behalf of their students….”

“This isn’t about parents making choices,” said Clark, interrupting her. “This is about use of federal dollars. You would put the state flexibility over our students.”

DeVos: “I think a hypothetical?”

Clark: “It’s not a hypothetical. It’s a real school.”

Eventually, the chairman intervened, allowing DeVos to answer the question:

Clark offered one last jibe: “I am shocked that you cannot come up with one example of discrimination that you would stand up for students.”

Subscribe to Queerty for a daily dose of #politics #betsydevos #rep.katherineclark(d-mass.) stories and more