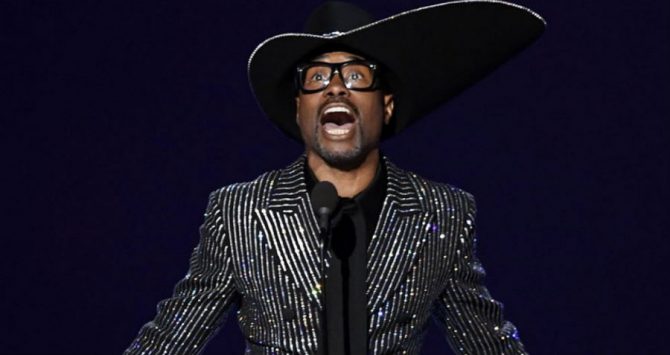 Actor Billy Porter has voiced his support for #BlackLivesMatter protesters following the murder of George Floyd in Minneapolis.

Porter–a man known for speaking his mind in no uncertain terms–took to Instagram to deliver his message. He began by chastising caucasian Americans who continue to deny systemic racism in the United States, and recalled incidents where he’d had the police called on him simply for being a black man in an affluent neighborhood.

Porter then focused on the African-American community, calling out violence committed by black men against LGBTQs, especially transgender women.

“My basic human rights have been up for legislation every single day that I have had breath in my body from all sides,” he said, “and by that I mean that the black community’s relationship with the LGBTQ+ community is appalling at best and eerily similar to that of white supremacists versus black folk. Hear me, black people, and hear me well. I’m calling you out right here and right now. You cannot expect our demands of equality to be met with any real legislative policy and change when y’all turn around and inflict the same kind of hate and oppression on us. The tragic reality here is that black trans, as well as gender non-conforming, women and men are being killed in the United States by cis black men to such a degree that it is nearly the worst emergency for trans women on the planet.”

“The murders of black trans women by black men since 2016 have helped drive the most violent period for LGBTQ+ people on record,” he continued. “Just this past week, during the riots, during the peaceful protests, Iyonna Dior was brutally beaten by a gang of black men while trying to peacefully protests for our rights. LGBTQ+ black folks are black people, too! Our lives matter, too! So this is my response to those of y’all who don’t understand that: F*ck you! And, yes, I am cussing. It’s time for cussing.”

“To all my homophobic and transphobic brothers and sisters, get your f*cking houses in order,” Porter seethed.

Porter’s remarks refer to a transwoman, Iyonna Dior, who was beaten by a group of more than 20 men by a group of onlookers. She managed to escape, though not before sustaining heavy bruising and swelling.

“We have two clear choices in November: vote this motherf*cker and all his cronies out of office, reset, and begin the American experiment again at zero, or not,” he went on. “In November, this election is the most important that we’ve ever seen in our lifetime. Democracy is on the ballot. White supremacy is on the ballot. Homophobia, women’s rights, trans rights, Muslim rights, all human rights all on the ballot this November, and I ask you America: will we be better than this? I guess we’ll know the answer come November. It’s time for change, and this time, change for good. Vote, vote, vote. God bless you all, and God bless the United States of America.”