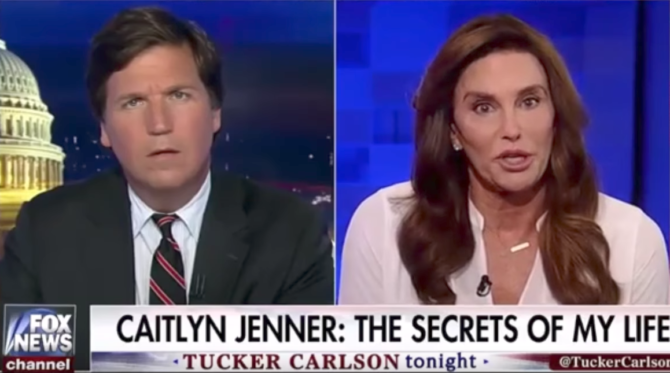 You might think that with so much time in the headlines, Caitlyn Jenner would figure out a way to stick to a message.

Such is not the case, and while we typically don’t scrutinize every off-putting thing she says, her recent appearance on Fox News proved exceptionally discordant.

Speaking with Tucker Carlson, Caitlyn in a single breath denounced her widely publicized support for Trump during the 2016 campaign while defended voting for him, and capped it off by spreading the utter nonsense that she thought Trump would somehow be great on LGBTQ issues once he was in office.

“I never actually came out and outwardly supported Trump. The media did that for me,” she said.

Well that’s a good soundbite (when in doubt, blame the media), except that when Trump became the presumptive GOP nominee in 2016, Caitlyn sang a different tune:

Anyone looking at the full campaign picture — and with all her money and connections, Caitlyn certainly had the opportunity to look — knew that the “Trump is an ally” narrative was just plain false. It took, oh, three days of him being in office for that to become painfully clear.

But Jenner still went on to stir up this word soup for Carlson about how it’s totally natural that she voted for him:

“I’m on the Republican conservative side. And he wound up being our candidate. And so certainly I was going to vote for him. He looked like he would be pretty good on all LGBT issues, which is important, because my loyalties do not lie with Donald Trump. My loyalties do not lie with the Republican party. My loyalties and what I am fighting for is my community, the LGBT community and particularly the trans issues that are out there, because there are many of them. And so that’s where my fight is. I thought Trump would be pretty good. But he’s kind of disappointed me in the first 100 days.”

Aw, Caitlyn’s “kind of disappointed.” If only her first choice in the race, Ted Cruz, could have won. He’d have done a stellar job lifting up the LGBT community, don’t you think?

Watch the interview below: