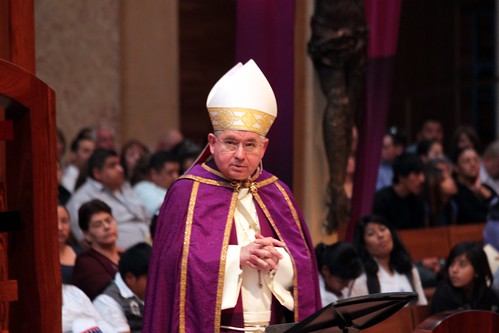 Say this for the California Catholic Conference: They don’t want to rewrite history. They just want to hide it. With dreary predictability, the bishops’ policy arm is condemning a bill that would require social studies texts to include the contributions of LGBT Americans. The mere acknowledgment in print of our existence, let alone our positive role in history, is apparently enough to send the bishops into a tizzy.

The Fair, Accurate, Inclusive and Respectful Education Act has passed both house of the California legislature and is awaiting the signature or veto of Gov. Jerry Brown (a onetime seminarian), who hasn’t said whether he supports the bill or not. The conference had unsuccessfully tried to defeat the bill by urging Catholics to lobby their legislators—whom the conference in a display of what it sees as charity called “politicians subject to the winds of political correctness.”

Now the bishops are looking to put the pressure on Brown. Los Angles Archbishop Jose H. Gomez recently described the bill as “another example of the government interfering with parents’ rights to be their children’s primary educators.” (He also opposes another bill allowing children 12 and up to get an HPV vaccination without parental permission. Apparently, it’s more moral to promote cancer deaths than sexual activity.)

State Sen. Mark Leno, who sponsored the bill, has said that the “collective silence on this issue perpetuate negative stereotypes” that contribute to bullying. Leave it to the Catholics to find someone to argue that saying good things about gays and lesbians is a bad thing. William May, chairman of the California-based group Catholics for the Common Good, said in a letter to the head of the state Assembly’s Education Committee that bulling of gay kids not about to be solved by “cosmetically sexualizing social studies”—proving once again that Catholic ideologues only see sex where the rest of us see role models.