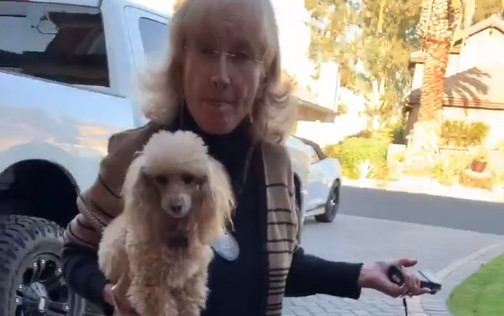 A California woman has become the subject of media scrutiny after surveillance cameras caught her intimidating a neighbor with a taser.

Adana Dean, a resident of Discovery Bay, California, approached her neighbors Gerritt Jones and his sister Jariell wielding the taser earlier this week. In the captured video, Dean tells the Joneses that their dog attacked hers. Another video, however, shows Dean petting the Jones’ pit bull, and calling it a “good dog.” The confrontation between the two quickly escalates with Dean brandishing her stun gun before she launches into another accusation.

The argument continues, with Dean accusing the Joneses of “being negative.” Jones, to his credit, doesn’t lose his cool, asking Dean to leave the property. When Jariell Jones asks Dean why she felt a need to carry a taser, she claims that she was afraid of their dog. The dog was not outside at the time of the argument. When pressed, Dean again goes for the racist rhetoric.

“You know what? You guys are acting like Black people and you should act like white people,” Dean says. “I was raised in Oklahoma City, where there were tons of black people. You’re acting like people that aren’t normal.”

Dean then adds that she has “top secret clearance” before threatening to sue the family.

Part 1: Discovery Bay, CA • I am TIRED of living this way. I am TIRED of passive aggressiveness. I am TIRED of the fake smiles. I am TIRED that I don’t feel safe in a house that I’ve lived in for 10+ years cause of the color of my skin. #karensgonewild #blm #racisminamerica pic.twitter.com/ZRf90pr2Il

The Joneses and Deans have lived in the same neighborhood for 12 years, and, according to Jones, have never had an altercation until now.

Dion Lim, a reporter for ABC News approached both families for comment. Dean’s husband would only refer to the incident as “minor” without providing any further explanation.

The Joneses, however, have a very different feeling about the confrontation. “Normal to her is people who will lay down and submit to unfortunately her white privilege and white supremacy,” Gerritt Jones told ABC. “I want my son to grow up and be proud of who he is. I hope that people all over the country learn from this see that this can’t be tolerated.”

Jones then added: “We’re going to act Black in our white neighborhood.”