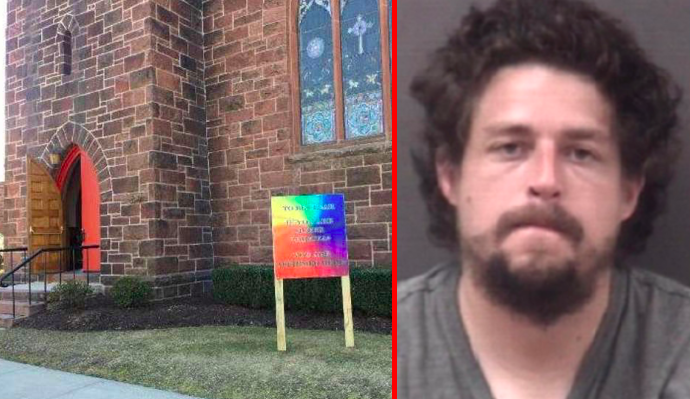 30-year-old Charles Yarbrough is being charged with multiple hate crimes after repeatedly breaking into and vandalizing a local church in Connecticut because he believed its congregation members and pastor “were supporting and pushing the LGBT agenda.”

Yarbrough was arrested on June 27 after police say he broke into the Memorial United Methodist Church in downtown Milford, Connecticut and slashed two chairs on the church’s altar and carving into an antique wooden banister.

He was upset because the church had posted a rainbow banner that read, “To be clear if you are queer LGBTQIA+ you are affirmed here!”

Police charged Yarbrough with a hate crime, burglary and criminal mischief in relation to the break-in.

Then, less than one week later, on July 1, he was arrested again.

This time Yarbrough broke into the building next to the church, which houses its classrooms and offices, and vandalized the pastor’s office door with a box cutter.

This week, police charged him with another hate crime in relation to the second attack.

“What can I say but pray for this guy,” Rev. Kristina Hansen of Mary Taylor Church says. “We are not dissuaded in any way, shape or form. We’re going to love our neighbor and we’re not going to stop because of one person’s response.”

“It’s unfortunate,” she added. “But it doesn’t dissuade us from our stance of affirmation. We’re the church, and we’re going to continue to be that.”