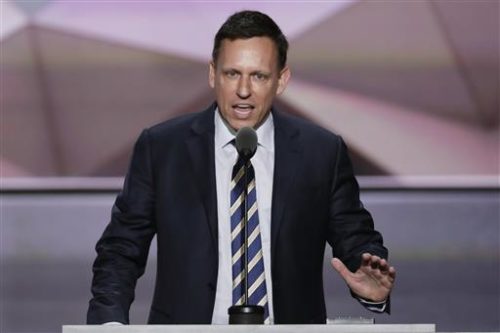 The openly gay billionaire had a prime-time spot at the GOP convention, which he used to praise Trump. After Trump was elected, Thiel said he wasn’t concerned about any antigay policies coming from the Trump administration. “People know too many gay people,” he said.

He even dismissed Mike Pence, whose homophobia is second to none, with a blithe “You know, maybe I should be worried, but I’m not that worried.”

If anything, Thiel said that “Maybe Trump is going to change everything way too little.”

What a difference six months makes.

Trump and his administration has undertaken the most viciously anti-LGBTQ stance of any administration since Reagan. Consider in just a few short days:

An ongoing investigation into the Trump campaign’s canoodling with the murderous Vladimir Putin, a West Wing in complete disarray with a staffer accusing another of sucking his own cock, Cabinet members under constant threat of dismissal, an attempt to throw tens of millions of people off health insurance apparently in order to mock former president Obama, and a legislative record that’s a giant goose egg. Oh, and did we mention all the lies, lies and more lies?

The one accomplishment that Trump can take credit for is establishing a presidency that’s on the brink of meltdown in a record six months. After all, Richard Nixon had to get into his second term to accomplish the same effect.

And where is Peter Thiel in all this? He did show up at a meeting between Trump and tech leaders in June. Otherwise, when it comes to Trump’s deeds, crickets.

Of course, Thiel must be disappointed for his own reasons. He had hoped that one of his associates would end up running the FDA (preferably into the ground) but instead the job went to someone who worked at the agency in the George W. Bush administration.

But Thiel has never been a staunch supporter of LGBTQ causes in any case. And his warped philosophy–that freedom and democracy are not “compatible”–may mean he’s perfectly fine with the dismemberment of the body politic Trump has undertaken. And if we’re collateral damage, well, maybe that’s the price to pay for the kind of world that Thiel wants.

Peter, it’s time not just to worry but to stand up. We’d love to hear publicly from you about these attacks on our equality–and yours.