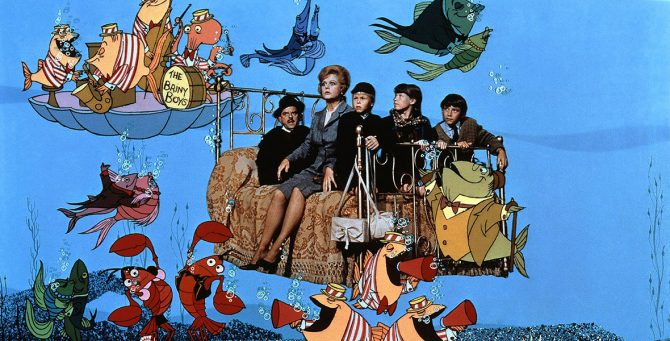 The Charming: Bedknobs and Broomsticks

Angela Lansbury once held the title of gay icon and sex symbol courtesy of her Broadway resume, which saw her show off her powerhouse voice, athletic figure and her dramatic skills. It’s a shame she rarely got any of those roles in movies, though one in particular, filmed at her peak does hint at her stage talents. 1971’s Bedknobs and Broomsticks casts Landsbury as a would-be witch in a musical about magic, friendship and Nazis.

This proto-Harry Potter finds Landsbury’s Ms. Elgantine Price taking in three young children during the World War II air raids. The four must travel the world via an enchanted bed–including underwater and an island of animated animals–in search of a lost magical spell to help the war effort. Hijinks ensue, as do toe-tapping musical numbers from stalwart Disney composers the Sherman Brothers. Bedknobs and Broomsticks sags a bit in its mid-section, but thanks to some very good special effects and a winning performance from Lansbury, it makes for great fun during the COVID days. Also, a great many men reading now actually wanted to be witches growing up, and likely took notes while watching. Don’t pretend you didn’t. Instead, embrace the camp and goofy fun of this good, clean romp and don’t be ashamed if you want to sing along.