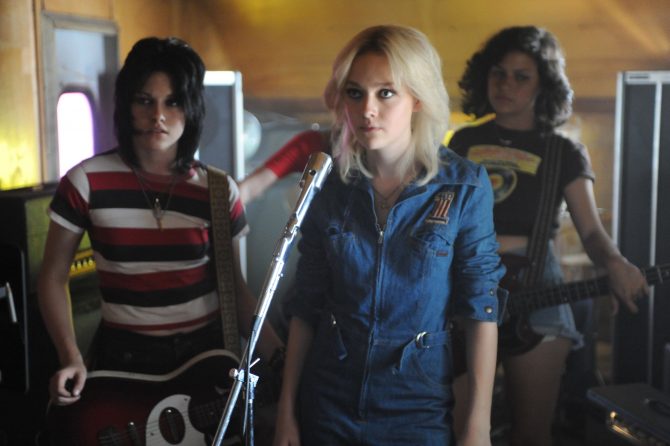 The Cherry Bomb: The Runaways

Dakota Fanning and Kristen Stewart both give two of their best performances in this wild biopic of the all-girl rock group. The Runaways chronicles the unlikely rise of the all-teen/all-female band under the eye of eccentric manager Kim Fowley (Michael Shannon, his usual ferocious self). Fanning plays lead singer Cherrie Currie as a die-hard David Bowie fan happy to live out her rockstar fantasies in front of an audience. Stewart, meanwhile, channels the quiet force of nature that is Joan Jett, and the ambition to prove she can rock harder than all the boys. Moreover, director Floria Sigismondi frames The Runaways as a love story between Currie & Jett, one that celebrities their real-life queer affair, and how their love fed into the energy of their stage performances. One other character casts a long shadow over the film: the music, which includes tracks like “Cherry Bomb,” “Rock & Roll,” “Hollywood” and “Queens of Noise;” tracks which play like bleach to the usual accumulation of teeny bopper girl pop. Part musical, part drug trip, The Runaways is, quite simply, terrific entertainment: an explosion of joy and queer beauty, cranked to maximum volume.